The 'In Da Club' rapper isn't the only celebrity poking fun at the former boxing champion and the YouTuber's public fight as Rich the Kid and Ray J have playfully recreated the incident.

AceShowbiz - 50 Cent may have kept his social media posts free of Floyd Mayweather, Jr. reference for a while, but that didn't mean he was ready to bury the hatchet. It's clear that he still holds the grudge against his friend-turned-foe as he has taken a dig at his longtime nemesis following the latter's brawl with Jake Paul.

Not missing any chance to shade the former boxing champion, the rapper took to his social media accounts to take aim at Floyd's hair. Posting a photo of an angry Floyd after his hat was snatched by Jake, Fiddy wrote along with it, "WTF going on, on champ head I heard he had his pubic hairs put on his face. Lol."

50 Cent's trolling didn't stop there. Over on his Twitter account, he shared another picture of Floyd during the public fight from a different angle. He commented on the former athlete's reaction in it, "Floyd like you can't show people my hair. LOL." 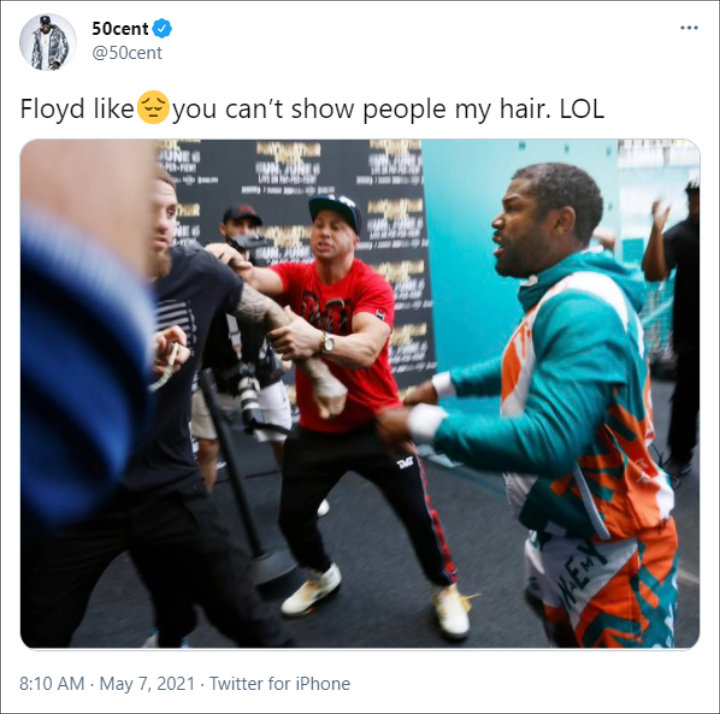 50 Cent isn't the only celebrity who pokes fun at Floyd and Jake's fight, though. Making use of his Instagram page, Rich the Kid has let out a video which features him and Ray J playfully recreating the public altercation.

In the hilarious clip, Rich acted as Jake, pointing his finger at Ray, who wore a hat like Floyd, as they spoke on each other's face with photographers surrounding them. As their fake argument escalated, Rich snatched Ray's hat and ran away with it, but big guys who seemed to be Ray's bodyguards were seen chasing Rich down.

Jake and Floyd got into a physical altercation at a Miami press conference, where the latter promoted a June 6 fight with Jake's older brother, Logan Paul. In a clip shared by Jake on Instagram, the two were trash-talking each other before Jake stole Floyd's hat. Securities then jumped between the two as Floyd surged toward him. Jake claimed he got punched in the eye during the tussle.

50 Cent Unsure About Participation in Pop Smoke's Next Posthumous Album