'The Challenge' star reveals on Instagram Stories that his baby daughter has to come back to the hospital since he was not able to feed her due to issues with her nasogastric tube.

AceShowbiz - Ashley Cain had to make another quick visit to hospital amid his daughter's Leukemia battle. Days after his 8-month-old returned home, "The Challenge" star revealed that he had to rush his baby back to the health center since he was unable to feed her through her tube, and admitted, "There is no easy day on this journey."

In the Instagram Stories he posted on Wednesday, April 21, the 30-year-old was seen inside a car with his daughter Azaylia on the baby car seat next to him. "We're back at the hospital for an X-ray now to check if the tube's in the right place and if it's not, clear a passage for a new tube because it's urgent she gets her food and medication," he explained. "The are no easy days on this journey, trust me."

Through the Stories, Ashley further gave an update on Azaylia's condition. "We just had to come back to the hospital now. When we were testing Azaylia's tube, her NG tube, it's not coming back with the correct pH [balance]," he dished about his little girl whom he shares with girlfriend Safiyya Vorajaa.

"That means we can't feed her down her tube. We can't put medication down her tube, so that means we've got a problem," Ashley continued. He went on to say that Azaylia can't receive another NG at the moment because "her platelet levels are so low." Doctors were worried they might cutting into a tumor in her body, which may "cause her to bleed out." 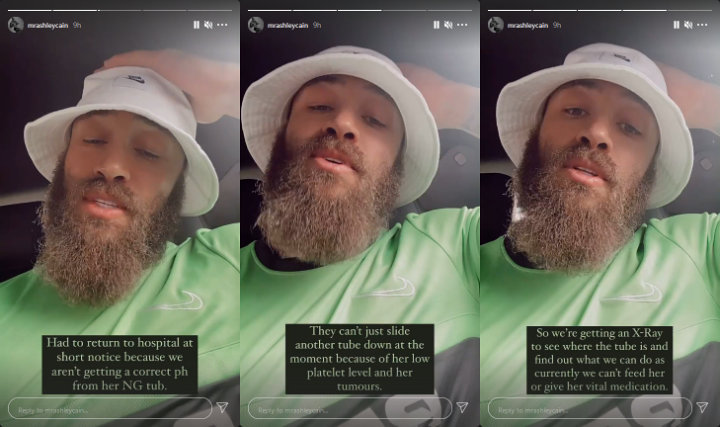 Despite the setback, Ashley concluded his Stories by cheering on Azaylia. "Let's go, champ," he exclaimed at the end of his video.

Prior the hospital rush, Ashley shared a meaningful post on his social media account. On Tuesday, April 20, she put out Instagram pictures of Azaylia meeting her cousin Anaya. In the caption, he penned, "One special moment at a time. When Azaylia finally got to see her cousin Anaya without a pane of glass between them, it melted my heart."

"The two little princesses were born only 6 days apart and when they touched hands for the first time, it sent immense amounts of emotion through my body," he added. "It made me happy, so happy, but with sorrowful tears."