Weeks after being charged with conspiracy to commit wire fraud and money laundering, 'The Real Housewives of Salt Lake City' star expresses gratitude to the 'unconditional love' she received.

AceShowbiz - Jen Shah has sent a heartfelt message for the "Shah Squad" amid her fraud scandal. Weeks after being charged with conspiracy to commit wire fraud and money laundering, the star of "The Real Housewives of Salt Lake City" thanked the supportive people in her life with a social media post about "true loyalty."

In a message she shared on Instagram Story on Monday, April 19, the 47-year-old posted a quote that read, "True friends will be by your side through it all." Expressing her gratitude, she added, "Thank you to those of you who that have shown my family and I real friendship, unconditional love & true loyalty during this difficult time."

"Thank you for not judging me and not believing everything you read online. I asked Allah to show me who my real friends are and he has. Allah Akbar," the reality TV star continued, and added the hashtags of "#Shahsquad," "#Shahstrong," and "#JusticeforJenShah." 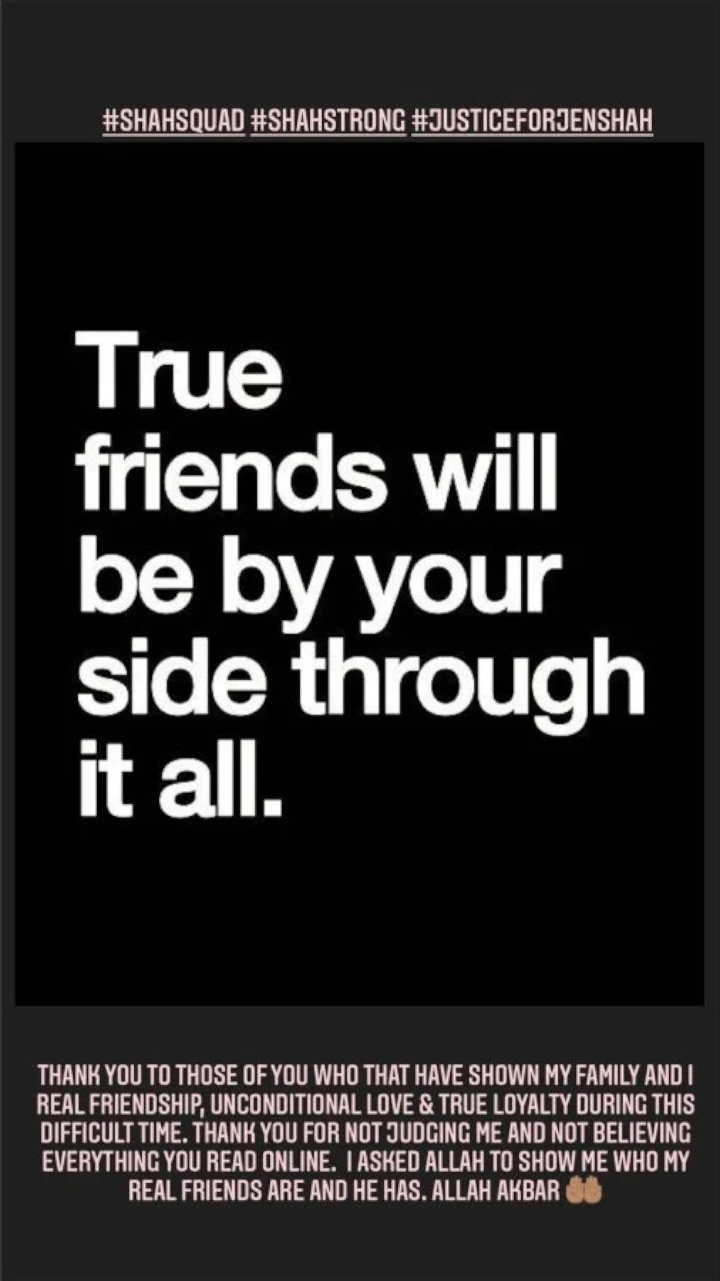 On March 30, Jen and her assistant, Stuart Smith, were arrested for conspiracy to commit wire fraud and conspiracy to commit money laundering. The two allegedly defrauding hundreds of people in a telemarketing scheme in six states, New York, New Jersey, Arizona, Nevada and Utah.

At that time, Manhattan U.S. attorney Audrey Strauss said in a statement, "Jennifer Shah, who portrays herself as a wealthy and successful businessperson on 'reality' television, and Stuart Smith, who is portrayed as Shah's 'first assistant,' allegedly generated and sold 'lead lists' of innocent individuals for other members of their scheme to repeatedly scam."

"In actual reality and as alleged, the so-called business opportunities pushed on the victims by Shah, Smith, and their co-conspirators were just fraudulent schemes, motivated by greed, to steal victims' money," Stuart continued. "Now, these defendants face time in prison for their alleged crimes."

Both Jen and her 43-year-old assistant pleaded not guilty to all of the charges. A trial is set for October 18, and she was released on a $1 million bail.

Jen and her husband Sharrieff Shah appeared in the first season of "The Real Housewives of Salt Lake City." Joining them in the cast ensemble were Meredith Marks, Lisa Barlow, Whitney Rose, Mary Cosby, and Heather Gay.