'The Suicide Squad' helmer reveals on Twitter his reaction after learning that the Academy Awards-winning filmmaker picks his Marvel film as Spielberg's favorite superhero movie.

AceShowbiz - Having his work praised by millions of fans may mean a lot of James Gunn, but having a veteran filmmaker liking his movie is apparently extra special for him. The "Super" helmer has revealed his emotional reaction upon learning that Steven Spielberg picked his "Guardians of the Galaxy" as his favorite superhero movie.

Gunn recently responded to a fan's question on Twitter which read, "@JamesGunn hey, I was wondering what went through your mind when you found out that Steven Spielberg listed Guardians of The Galaxy as one of his top 20 favorite movies of all time. How did you react?"

In his reply, the 54-year-old admitted he "cried a little" because he's a massive fan of Spielberg's works, though he's not sure if the list that the fan mentioned is real. "I don't know if that list going around is real. I do know that Spielberg has said his favorite superhero movie is Guardians," Gunn wrote back.

He went on detailing, "I was in the editing room with @FredRaskin when I heard & I maybe kinda cried a little." Returning the favor to the 74-year-old awards-winning filmmaker, he added, "I'm making movies because of Jaws & Raiders." 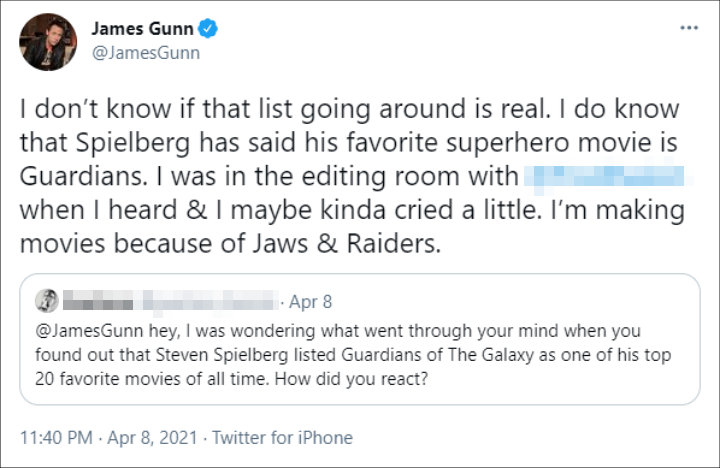 The fan was referring to the list which recently made its rounds on the web, naming Spielberg's supposedly 20 favorite movies of all time. Gunn's "GOTG" (2014) came at No. 5, just behind "A Guy Named Joe" (1943) and right above 1953's "War of the Worlds". Also on the list as such acclaimed works as "The Godfather", "Citizen Kane" and "Psycho".

While the validity of the list has not been confirmed, Spielberg has in the past declared his love for Gunn's superhero movie. In an interview with Omelete in 2016, the "Lincoln" helmer gushed about the film, "When it ended, I left the cinema with the feeling that I had just experienced something new, free of cynicism and without concern for being gritty when necessary."

Gwyneth Paltrow on Shocking Mom With Goop Products: Even Proper Ladies Have Sexuality