In the family portrait, Terri Irwin, her son Robert and son-in-law Chandler can be seen holding pairs of Crocs shoes while Bindi cradles baby Grace Warrior.

AceShowbiz - Bindi Irwin's mother has found her own unique way to celebrate April Fools' Day. Just one week after her daughter gave birth to a baby girl named Grace Warrior, Terri Irwin took to social media to share a photo of her granddaughter's "first croc encounter."

On Thursday, April 1, the 56-year-old widow of Steve Irwin made use of Twitter to share a family portrait. The snap saw her, son Robert Irwin and son-in-law Chandler Powell holding pairs of Crocs shoes while her daughter Bindi cradled baby Grace. In the accompanying message, she jokingly wrote, "Beautiful baby Grace, first croc encounter...April Fool's!" 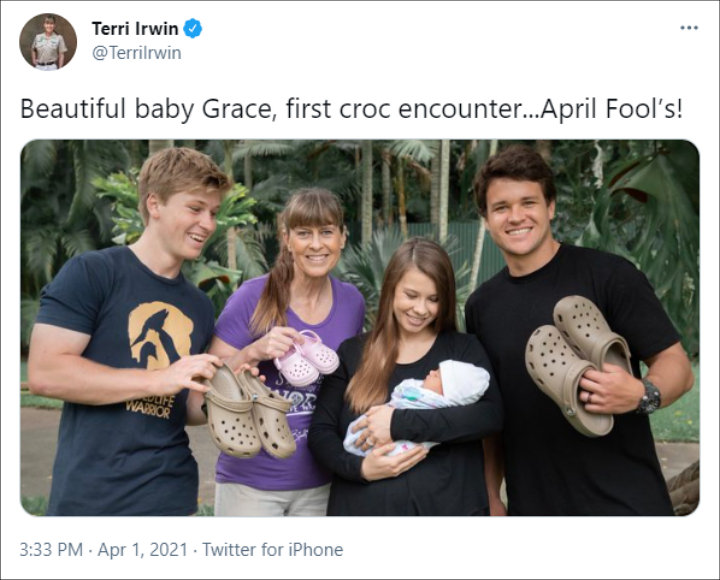 Terri's post came after Bindi announced Grace's arrival via Instagram. Alongside a picture of her and husband holding their new bundle of joy, she raved, "March 25, 2021. Celebrating the two loves of my life. Happy first wedding anniversary to my sweetheart husband and day of birth to our beautiful daughter. Grace Warrior Irwin Powell."

"Our graceful warrior is the most beautiful light. Grace is named after my great-grandmother, and relatives in Chandler's family dating back to the 1700s. Her middle names, Warrior Irwin, are a tribute to my dad and his legacy as the most incredible Wildlife Warrior," the new mom added. "Her last name is Powell and she already has such a kind soul just like her dad."

"There are no words to describe the infinite amount of love in our hearts for our sweet baby girl," the 22-year-old conservationist then concluded. "She chose the perfect day to be born and we feel tremendously blessed."

Bindi went public with her pregnancy in mid-August 2020. Sharing on Instagram an image of herself and her husband holding a toddler-sized uniform from Australia Zoo, she declared, "Baby Wildlife Warrior due 2021. Chandler and I are proud to announce that we're expecting! It's an honour to share this special moment in our lives with you."