AceShowbiz - Halle Berry stands up for herself and other black women. The Oscar-winning actress has called out radio host Rob Lederman after he rated black female celebrities' attractiveness based on their skin color on his radio show "Morning Bull".

Enraged by his colorist comments, the "Kingsman: The Golden Circle" star took to Twitter to share her two cents. "Disgusting," she wrote on Friday, March 26. "It's ridiculous this type of nonsense is still being broadcasted across airwaves." Directing her message to Rob, she added, "ALL Black women are beautiful and worthy, Rob Lederman. GTFOH."

On Wednesday, Rob discussed whether or not he finds certain black women "attractive." When judging them based on their varying skin tones, he compared it to toast. "See we have ours-and I may get into trouble for this-I have them to the attractiveness of women that I find to be attractive," he said on air. 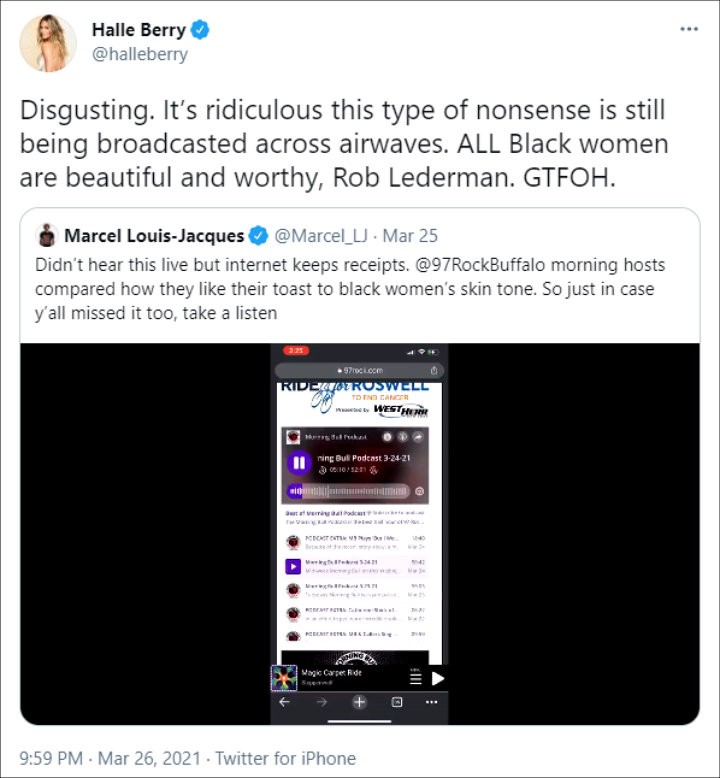 "We have (our toaster settings)… at the attractiveness of women that I find to be attractive, so I will never go to a Serena Williams level… But I'm very comfortable at a Halle Berry level. I need a little bit of mulatto still coming through, it can't be...," he shared. When a co-host asked, "Is Gayle King, that's not your realm?" Rob responded, "No, Gayle King is not even on my toaster level."

Rob was "swiftly terminated" on the same day from the Buffalo, New York-based 97 Rock radio station, while his co-hosts Chris Klein and Rich "Bull" Gaenzler were suspended. The company said in a statement, "Cumulus Media operates from a clearly-defined set of programming principles and there is no question that Rob Lederman's comments made on The Morning Bull Show are in direct violation of those principles. We apologize, and deeply regret the incident."

Rob later posted his own statement on Twitter expressing his apology. "I want to sincerely apologize for hurting people with my foolish and ignorant comments yesterday," so he wrote. "After listening to what I said, and how it must have sounded to others, I was horrified. I 100% understand why people are justifiably angry. I made a mistake and it's hard to look myself in the mirror, but I want to acknowledge it. I apologize from the deepest depths of who I am." 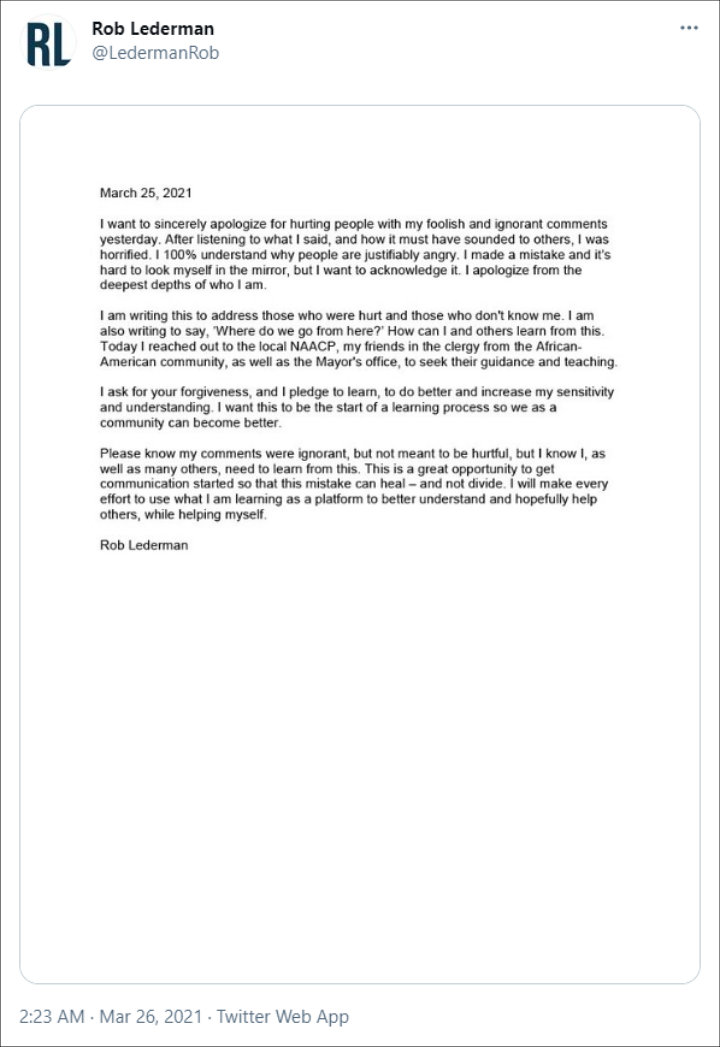 The disgraced radio host posted his apology on Twitter

Rob said that he reached out to "the NAACAP, my friends in the clergy from the African-American community, as well as the Mayor's office, to seek their guidance and teaching." He added, "Please know my comments were ignorant, but not meant to be hurtful."