The 'High School Musical' star has welcomed her first child with husband Christopher French and took it to her Instagram account to share details and first picture of the baby boy.

AceShowbiz - Miley Cyrus marked the 15th anniversary of the launch of her hit Disney series "Hannah Montana" on Wednesday, March 24, by writing her teenage character a letter.

Now 28, the singer and actress shared the handwritten note on social media, calling her former TV favorite "a rocket that flew me to the moon + never brought me back down."

"We had an equal exchange in which you provided a superlative amount of fame in return for the anonymity I could gift to you," Miley wrote. "But a lot has changed since then... . "

"I am indebted not only to you Hannah but to any + everyone who believed in me from the beginning. You have all my loyalty and the deepest appreciation until the end."

The "Wrecking Ball" star also thanked her team at Disney, cast members and special guests, crew, agents and managers, adding, "ESPECIALLY my mommy who took me to every lesson + audition even when it required leaving town or making a cross-country move which my siblings so selflessly underwent."

Oddly enough, Miley got a reply from the fictitious character. Hannah Montana wrote back, "Nice to hear from you @MileyCyrus. It's only been a decade," on the show's official Twitter account. 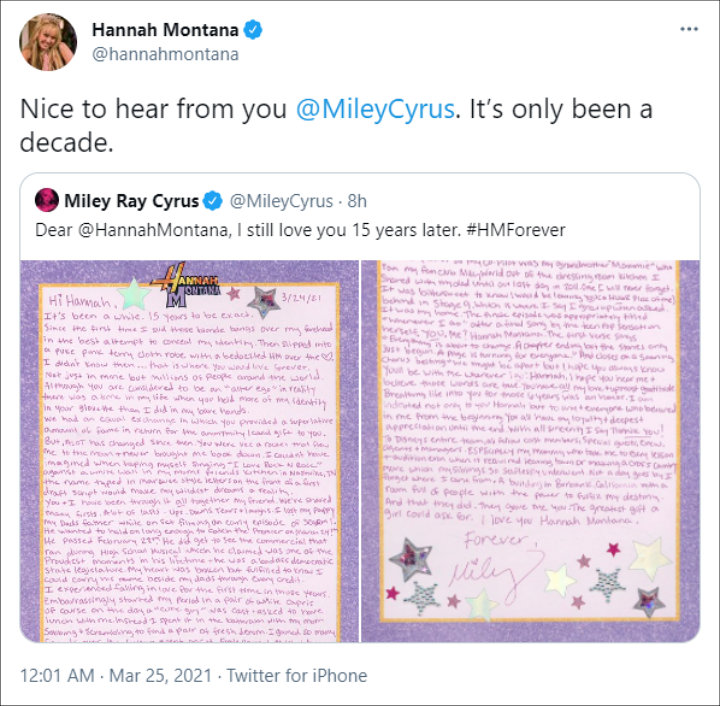 Miley's Twitter hashtag #HMForever has since been retweeted by many social media users. "I Love You Hannah I Missed You So Much #HMForever," one tweet read. Another user chirped, "Wow it's been 15 years since Hannah Montana and that show basically created me lol. My 3rd grade talent for the talent show was 'being the best at being Hannah Montana.' I wore a bright a** blonde wig and had a HM microphone. I'll forever love this show. #HMForever"