The 'Outside Today' rapper is in FBI custody after cops used a K-9 to track him down when the LAPD and the feds' attempt to apprehend the rapper resulted in a short pursuit.

AceShowbiz - Yaya Mayweather still cares a lot about her ex NBA Youngboy a.k.a. Youngboy Never Broke Again and his latest problem with the law has seemingly affected her mood. The daughter of Floyd Mayweather, Jr., who shares a 2-month-old son named Kentrell Jr. with the rhymer, has lamented about having a bad day after news broke of the rapper's arrest.

Yaya appears to be heartbroken due to her baby daddy's legal trouble. "My day has been completely ruined," the 20-year-old wrote on her Instagram Story, shortly after it's reported that Youngboy is currently in federal custody.

She followed it up with a show of support for the "Outside Today" hitmaker, whose real name is Kentrell DeSean Gaulden. The mother of one posted a picture of her baby daddy and wrote in the caption, "#FREEKENTRELL." 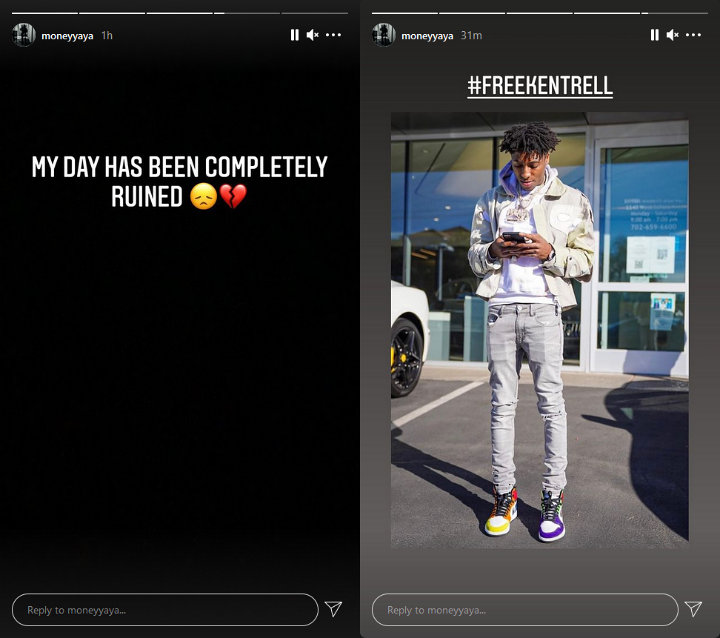 Youngboy was arrested on Monday, March 22. According to TMZ, the LAPD and the FBI attempted to pull over a vehicle that the Baton Rouge native was in due to an outstanding federal warrant for his arrest.

The attempt to apprehend him resulted in a short pursuit as Youngboy reportedly fled. Once the car stopped, the 21-year-old star reportedly got out of the car and ran on foot. Law enforcement sources say the cops set up a perimeter and brought in a K-9 to help locate Youngboy. The sources note that the police dog sniffed him, but didn't bite him.

Cops allegedly found a firearm in Youngboy's car, but it's unclear whom the weapon belongs to. His camp has not released a statement on his arrest.

Last month, District Attorney confirmed that Youngboy was under investigation by federal authorities. On February 9, District Attorney Hillar Moore told Baton Rouge's local ABC affiliate WBRZ that the emcee was the subject of a state probe into what happened during the filming of a music video in Baton Rogue in September 2020 that led to the arrests of 16 individuals, including him, on drug and weapon charges. As a convicted felon, federal and state laws prohibit the rapper from being in possession of a firearm.

At the time, the "Valuable Pain" emcee's attorney James Manasseh filed a motion to have his client released from bond supervision since it's been four months since the incident and no charges have been filed. The lawyer additionally argued that his client did nothing illegal during the September incident. He was not in custody at the time.