The 'Glee' co-creator states he, Brad Falchuk and Ian Brennan remain 'committed' to creating a college fund for Naya's son after her father George Rivera calls him out on Twitter.

AceShowbiz - Ryan Murphy isn't forgetting his promise to Naya Rivera. The TV writer and producer has just asserted his plans to create a college fund for the late actress' son Josey, after her father accused him of not following through on his promise.

In a statement posted on his Twitter account on late Tuesday, March 9, Murphy stressed, "Myself, Brad Falchuk, and Ian Brennan have committed to create a college fund for Naya Rivera's child Josey through the Naya Rivera Estate Trust." He added, "We have been in repeated conversations with the appropriate executors of her estate."

Ryan posted the tweet in response to Naya's father calling him out on Twitter. Accusing the "Glee" co-creator of bailing on his promise to his late daughter, George Rivera tweeted, "Everyone needs to know what Ryan Murphy really did ... or didn't do !!! I'm about to blow up this story .... and make sure he's knows that I know ...." 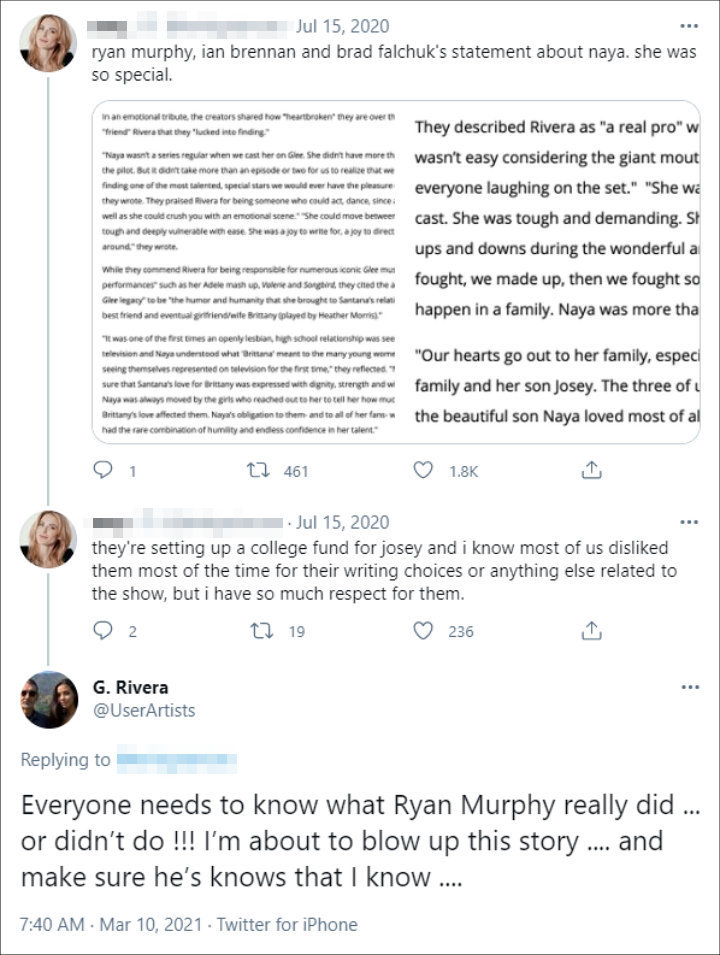 Attempting to gain wider attention, George urged the show's fans to spread his claim, "Get the glee tweeters on this !!!!" 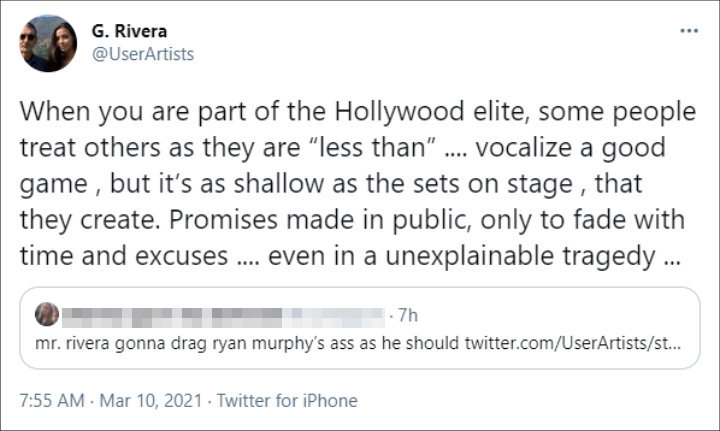 He added in another tweet, "When you are part of the Hollywood elite, some people treat others as they are 'less than' .... vocalize a good game , but it's as shallow as the sets on stage , that they create. Promises made in public, only to fade with time and excuses .... even in a unexplainable tragedy …," before remarking, "Broken Promises..... fake outrage .... hollow gestures ..... no phone call."

Naya died in July 2020 following a tragic boating accident on Lake Piro with Josey. Shortly after the news hit the web, "Glee" co-creators Ryan, Brad and Ian released a statement expressing their grief. "We are heartbroken over the loss of our friend Naya Rivera," the trio said. "Naya could act, she could dance and she could sing (could she ever sing!). She could nail a joke as well as she could crush you with an emotional scene. She could move between being scary tough and deeply vulnerable with ease. She was a joy to write for, a joy to direct and a joy to be around."

Further remembering the Santana depicter, they continued, "Naya was more than just an actor on our show - she was our friend." They concluded by stating, "Our hearts go out to her family, especially her mom Yolanda, who was big part of the 'Glee' family and her son Josey. The three of us are currently in the process of creating a college fund for the beautiful son Naya loved most of all."

Tyler Posey Is Unapologetic for Being 'Sexual,' Says He's No Longer Sober