JP Cappelletty, who is better known as Rook, assures he'll 'bounce back' while showing his right arm and hand in a cast in a picture posted on his Instagram Story.

AceShowbiz - Machine Gun Kelly's drummer did not only lose some of his precious possessions, but also he could've lost his life in a recent scary encounter with thieves. JP Cappelletty, who is better known as Rook, has recently become the victim of a robbery, which landed him in the hospital.

Rook was robbed when he was walking down a street in the Hollywood Hills on Tuesday night, March 2 at 8 P.M., TMZ reports. Two men reportedly jumped out of a vehicle to rob him. Law enforcement sources say a physical altercation ensued, but Rook couldn't defend his belongings and had thousands of dollars worth of property stolen from him.

Rook was also hit by a car during the attack, which resulted in his foot and arm injuries. It's unclear who hit the drummer though. The suspects managed to get away and there's no information if they were armed or not.

MGK has visited Rook at the hospital after the robbery. In a picture shared by the drummer on his Instagram Story, the "Bloody Valentine" spitter was seen taking a selfie with his injured friend. Rook seemed to be in good spirits despite the unfortunate incident and hospitalization as he got playful by sticking out his tongue, while the rapper flipped the bird to the camera.

Rook also posted another photo showing him lifting his right arm and hand in a cast. Assuring his friends and followers that he will fully recover, he wrote over the image, "Don't worry I'll bounce back." 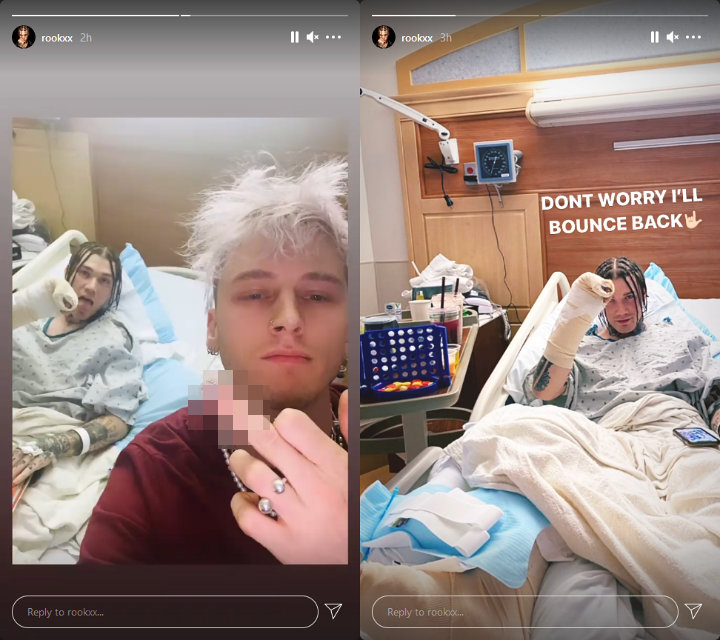 MGK's drummer Rook shared photos from the hospital after robbery.

Rook has a close relationship with MGK since he landed the gig as the "El Diablo" emcee's drummer in 2012, when he was a high school senior. He often joined the pop-punk artist on tour and accompanied the 30-year-old star for his debut "Saturday Night Live" performance on January 30, during which they performed "My Ex's Best Friend" and "Lonely" from MGK's Billboard 200 No. 1 album "Tickets to My Downfall".

"SATURDAY NIGHT LIVE! Dreams come true, but it ain't an easy road," Rook expressed his pride with a post that included clips from their performance. One of the clips saw MGK giving Rook a high-five to celebrate the gig. Rook also made a cameo in MGK's "Downfalls High" musical film.