Dr. Oz Praised for Saving a Man Who Collapsed at New Jersey Airport

When recalling his heroic action, the former host of 'The Dr. Oz Show' says he began giving the man CPR before finally shocking him at the highest power with a defibrillator.

AceShowbiz - Dr. Mehmet Oz has gained praise for his recent heroic action. After revealing that he helped revive a man who collapsed at Newark Liberty International Airport, New Jersey, the former host of "The Dr. Oz Show" was showered with compliments from many social media users.

Making use of Twitter on Tuesday, March 2, the 60-year-old first retweeted an article from TMZ that shared his rescue story. "Last night, a man collapsed near me and my family after we arrived @EWRairport. I performed CPR with the help of a Newark Port Authority police officer and cleared the man's airway," he detailed. "Thankfully, the airport had a defibrillator nearby that we were able to use to save his life."

"As a physician and a human being, it's our responsibility to jump in when there's a medical emergency. Another critical reminder of how important it is to take the time to learn how to do CPR and use a defibrillator," Mehmet added in a following tweet. He then shared a third post in which he provided a link to an article about how to "perform CPR if you ever find yourself in a similar situation." 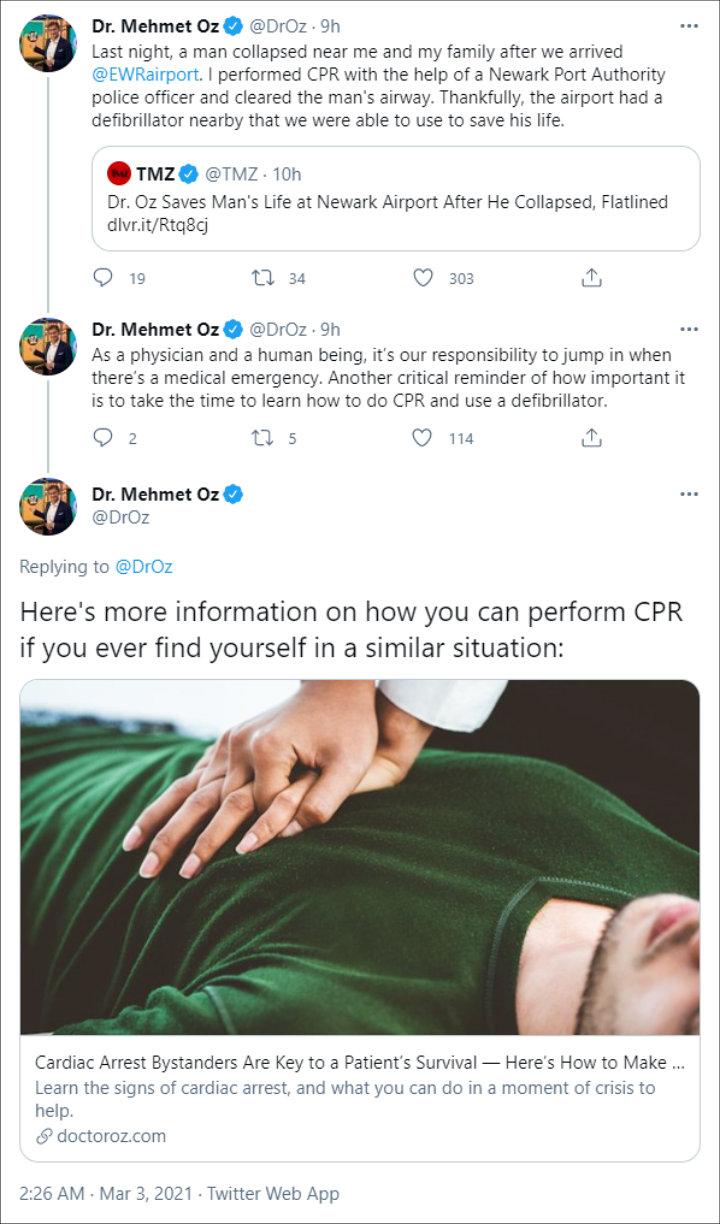 Many of Mehmet's followers have since praised him for the rescue. One exclaimed, "GOD BLESS YOU MY HERO." Another raved, "If I recall, this is the second time you were in the right place at the right time. You are a blessing." A third gushed, "Just proves how special you are." Someone else exclaimed, "Way to go Dr. oz how blessed he was that you were there ! Prayers for his recovery."

Before tweeting his rescue effort, Mehmet talked to TMZ about the incident. "I was with my wife and one of my daughters and I left my daughter with the luggage to get, you know, the stuff that was coming off the care herself. And she was about five seconds later, 'Daddy, Daddy, come quick,' " he recounted.

"A fairly big gentleman ended up being 60 years of age... had collapsed falling on his face... There was no pulse. So the first thing you do when there's no pulses, you give the patient a pulse by doing CPR. So getting top of his chest, compressing as hard as I could," he continued sharing. "So as I was doing that I was seeing this foam coming out of his mouth and his color was getting horrible."

The TV personality revealed a Port Authority police officer came to help continuing the CPR as he cleared the man's airway. He then used a defibrillator to shock him back to life at the highest power. After getting his breath back, he was admitted at a New Jersey hospital and reported to be doing "okay" as he waited for the result of the evaluation test.