The 'Keeping Up with the Kardashians' star assures that she didn't get surgery to stretch her fingers after fans noticed that her fingers and feet appear to be disproportionately long in the promo photos.

AceShowbiz - Khloe Kardashian was amused by how people reacted to her latest Good American campaign. Having found her promo photo for her brand's new shoes collection being described as "photoshop fail," the "Keeping Up with the Kardashians" star could not help but laugh at it.

On Tuesday, February 23, the 36-year-old's ad picture was put out on her fashion brand's Instagram account. Many people on social media were quick to make a buzz out of the fact that her fingers and feet appear to be disproportionately long in the photo. The online comments prompted her to set the record straight.

"I mean..LOL how could anyone believe this is the size of my feet?! it's The angle and the type of lens. And personally I think this camera lens is so f**king cool. It gives the photo a different vibe and not the same old visual I always see," the daughter of Kris Jenner first explained on Twitter. "Either way, I'm happy with them."

Khloe followed it up with another tweet that read, "Not to worry! I don't have freakishly long fingers. It's the lens! I can't believe I'm even tweeting this LOL my old hands normal sized hands are still in tack." She further stressed, "Nope I didn't get a surgery to stretch my fingers and nope it's not a 'photoshop fail.' Have a great day."

"I absolutely love how my GA campaign turned out! I have so many more photos to post and I'm so excited about it! Stay tuned! Hope the 'concern and confusion' is now put to rest and we can just enjoy the photos LOL this really made me laugh today," the reality star penned in the third post. "Thanks for the giggle. No lie." 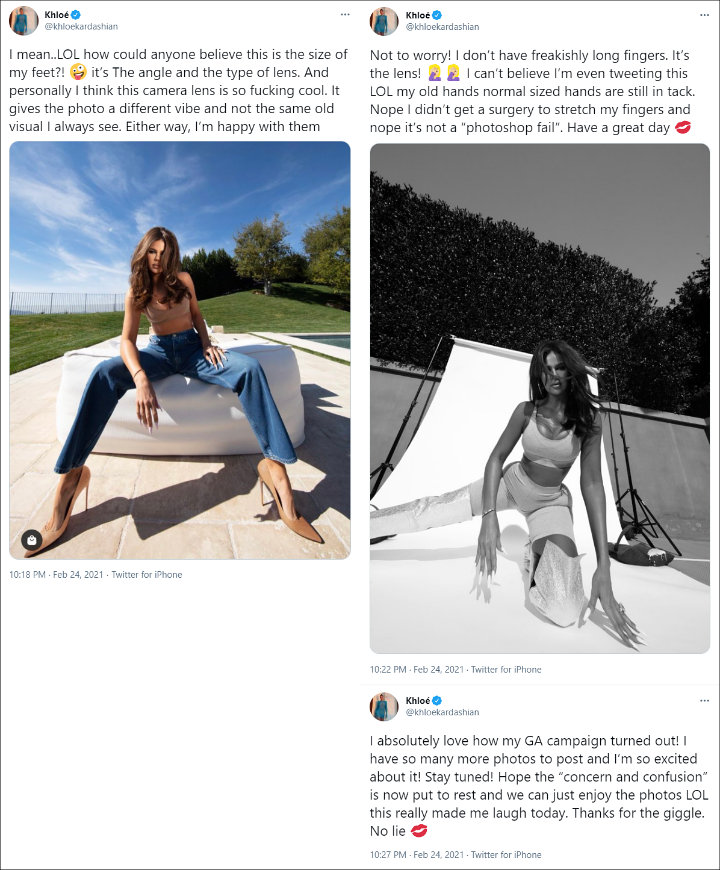 Khloe has since received positive comments from her fans. One user said, "I'm glad you took it to a funny side, I also laughed a lot." In response, she noted, "It made me laugh. Laughter is a great way to start any day." When another individual replied, "I love that you can laugh about it that's why you're my fav," she wrote back, "No really it sort of made me happy. Just because it's so silly."