Jane Lynch, Rosanna Arquette and Patton Oswalt blast the 'Buffy the Vampire Slayer' alum for defending the outgoing president amid fans' petition to have his scene removed from the 1992 Christmas film.

AceShowbiz - Kristy Swanson has found herself some enemies in fellow actors after voicing out her support for Donald Trump. The actress has been called out on Twitter after protesting the removal of the outgoing president's scene from "Home Alone 2".

Much to her embarrassment, many didn't seem to have problem with missing out her parts in the above-mentioned works. "I'm sorry. Who are you?" Jane Lynch responded to Swanson's tweet. Rosanna Arquette sarcastically tweeted, "So would we."

Meanwhile, Patton Oswalt blasted the "Buffy the Vampire Slayer" vet, "This is weak, Kristy. I was removed from AS GOOD AS IT GETS and BAD SANTA years before Trump even THOUGHT of running for President. That's how I support MY leader. Why do you hate America?" 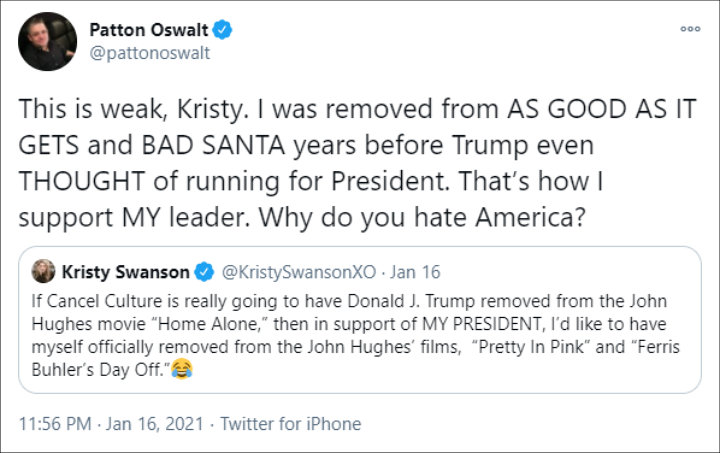 Another Twitter user pointed out, "She had one speech in Ferris ('I heard from my mother's sister's brother...') Would be a pretty easy re-edit. Not sure why she's offered up her only residual income, though. & I will not be googling her walk-on in Pretty in Pink. I'm already mad at myself for working this hard."

Fans of "Home Alone 2" are petitioning to have Trump's cameo cut from the movie after he incited riot at the Capitol Hill on January 6. In the 1992 cult Christmas film, the 45th POTUS is featured briefly in a scene where Macaulay Culkin's Kevin McCallister asks Trump for directions while lost in New York.

"Digitally remove him from Home Alone 2 next," one fan wrote on Twitter. Another tweeted, "Disney should remove Donald Trump from Home Alone 2." Some others demanded that Trump be replaced with former president Barack Obama or Trump's successor Joe Biden in the scene. 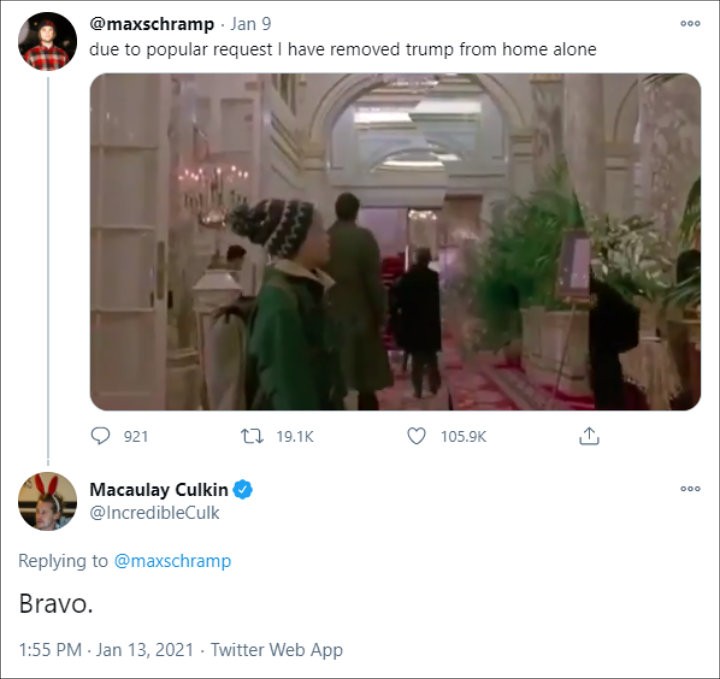 Culkin even seemed to support fans' demand as he replied to a user who posted his version of the scene with Trump being edited as an invisible figure. "Bravo," the actor wrote.

Myleene Klass: I Suffered a Miscarriage During a Live Broadcast