Standing by her brother Kirk Cameron amid the backlash over his latest maskless party, the 'Fuller House' alum also denies partaking in 'any recent caroling events.'

AceShowbiz - Candace Cameron Bure lets it be known that blood is thicker than water. The actress has stood by her brother Kirk Cameron after the actor came under fire again for hosting another Christmas caroling protest.

Taking to her Twitter page, the D.J. Tanner on "Full House" defended her brother against "vile tweets" directed at his and her family. "I don't appreciate the vile tweets about my family. I believe respectful dialogue is the key to being heard," she wrote in her Thursday, December 24 post.

Candace, however, didn't seem to be on the same page with her brother about his disapproval to California Governor Gavin Newsom's stay-at-home order. Through the same tweet, she also denied that she ever participated in caroling protests held by her brother.

"I did not attend any recent caroling events," the "Fuller House" alum insisted. She went on stressing how serious she is with the COVID-19 precautions, "Also, I choose to follow the greater guidelines by wearing a mask and social distance when I'm in public." She signed off her statement with a message to her fans and followers to "stay safe." 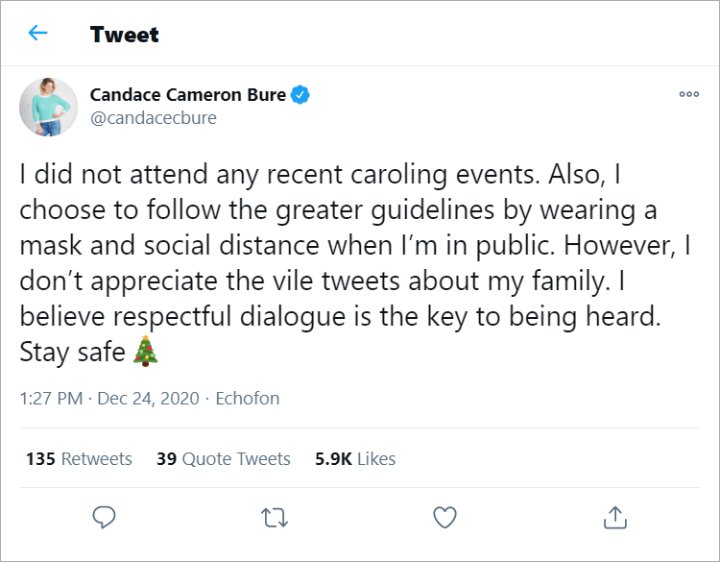 Candace Cameron Bure spoke up amid backlash against her brother Kirk for hosting maskless caroling protests.

Candace released the statement after her brother Kirk came under fire for hosting another maskless party to protest against the stay-at-home order in California. On Tuesday, December 22, the "Fireproof" star shared on Instagram Stories some photos and videos from the event held at the parking lot of The Oaks mall in Thousand Oaks, California. One of the photos saw him without a mask. He instead sported a fake Santa beard. Dozens of maskless attendees behind him could also be seen not practicing social distancing.

Before the event took place, the Oaks mall officials released a statement condemning the initiative. "In regards to the peaceful protest planned for The Oaks this evening, we do not condone this irresponsible - yet constitutionally protected - event. We share your concern and have notified the sheriff's office. As well, we have reached out to the event planner to ask that they do not use The Oaks as their venue," the statement read.

It was the third protest that Kirk organized this month, after hosting similar events on December 13 and another one a week prior to that.

Carrie Underwood in Christmas Spirit Throughout 2020 for 'My Gift'

Candace Cameron Credits Pandemic for Her Strengthened Bond With Husband