The Cyborg depicter relays a message from Warner Media addressing the conclusion of its investigation into the actor's allegations of abusive behavior against director Joss Whedon.

AceShowbiz - Ray Fisher has scored a victory following months-long back and forth between him and Joss Whedon regarding his allegations of toxic work environment on the set of "Justice League". Warner Bros. launched an investigation into the actor's claims and on Friday, December 11, it announced that it has concluded the investigation.

"WarnerMedia's investigation into the Justice League movie has concluded and remedial action has been taken," the studio said in a statement, while remaining tight-lipped on the findings and the repercussion to those involved in the allegations. Fisher, however, believed that Whedon's recent exit from HBO's "The Nevers" had something to do with the investigation.

Meanwhile, Fisher seemed to be rather pleased with the results. Relaying a message he received from Warner Media, he tweeted, "The following was relayed to me on behalf of @WarnerMedia at 5pm EST today: - The investigation of Justice League is now complete."

"It has lead to remedial action (Some we've seen, and some that is still to come)," read the second point. "And this statement (which truly belongs to ALL who participated in the investigation): 'WarnerMedia appreciates you having the courage to come forward and assist the company with creating an inclusive and equitable work environment for it's employees and partners.' "

Regardless the conclusion of the investigation, the Cyborg depicter said, "There are still conversations that need to be had and resolutions that need to be found." He expressed his gratitude to those who have been supporting him as writing, "Thank you all for your support and encouragement on this journey," before concluding with, "We are on our way. More soon." 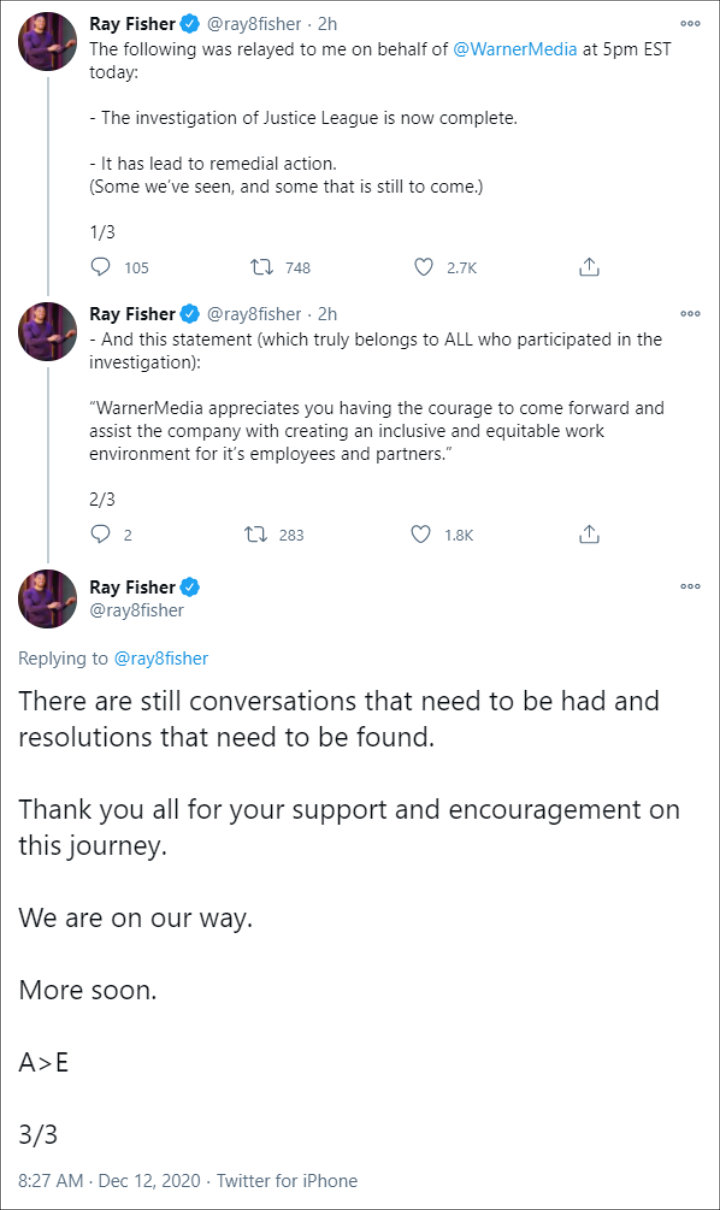 Fisher first came with the allegations against Whedon, who took over the directing role from Zack Snyder during the pre-production of "Justice League", in July. In an interview with Forbes, he claimed to have heard "blatantly racist conversations" among studio executives. He also complained about "massive blowups, threats, coercion, taunting, unsafe work conditions, belittling, and gaslighting like you wouldn't believe" on the set.

Jason Momoa, Fisher's co-star in the 2017 movie, publicly supported the 33-year-old actor and demanded proper investigation into Fisher's claims. "THIS S**T HAS TO STOP AND NEEDS TO BE LOOKED AT @ray8fisher AND EVERYONE ELSE WHO EXPERIENCED WHAT HAPPEN UNDER THE WATCH OF @wbpictures NEEDS PROPER INVESTIGATION," he tweeted in September, before confirming Fisher's claims about "the s**tty way we were treated on Justice League reshoots."