The 'Avengers: Endgame' actor also clarifies that his character in an upcoming Pixar film is different from the one voiced by Tim Allen, claiming, 'This one is gonna special.'

AceShowbiz - Chris Evans has landed a new role post-his Captain America days. The actor has been announced to voice Buzz Lightyear in a new Pixar movie. Titled "Lightyear", the upcoming movie will tell the origin story of the original astronaut whom the toy in the "Toy Story" film series is based on.

Retweeting Pixar's post of a teaser of "Lightyear" that appears to show a brief intergalactic voyage before featuring the film's title, he wrote on Thursday, December 10, "I don't even have the words." He added in another tweet, "And just to be clear, this isn't Buzz Lightyear the toy. This is the origin story of the human Buzz Lightyear that the toy is based on." 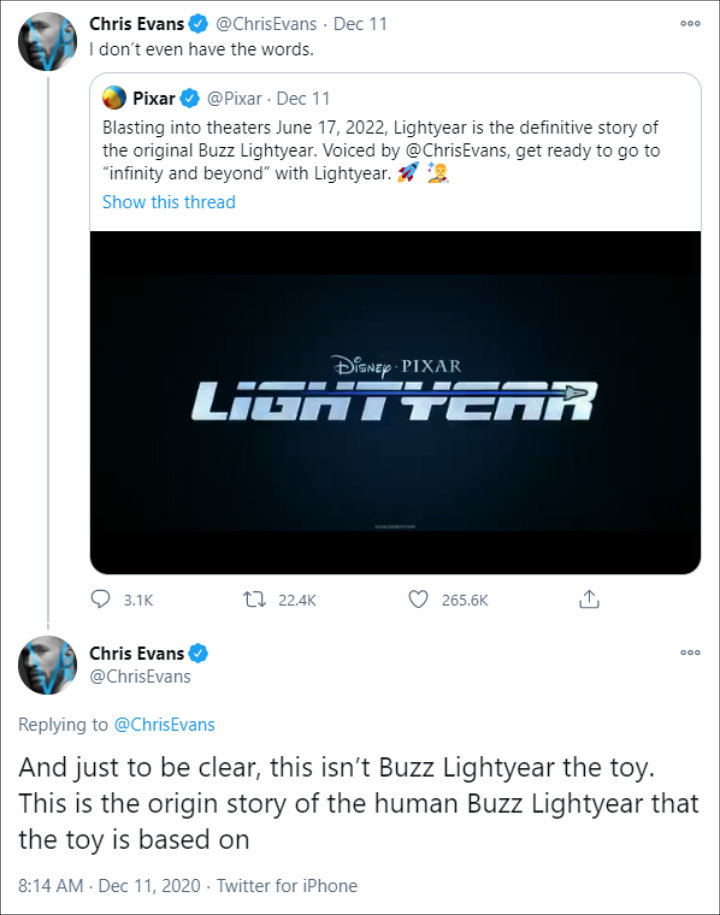 Evans also shared his excitement about scoring the voice role on his Instagram page. Along with a picture of the character, he wrote, "Working with Pixar is a dream come true. I've been a massive fan of their films since the very beginning. My team could barely contain their excitement when they told me that Pixar had a pitch for me. All they said was 'Buzz Lightyear'."

Assuring that he isn't replacing Tim Allen, who originated the character in the "Toy Story" movies, he continued, "I didn't know what that meant, since Tim Allen is Buzz Lightyear, and no one could ever touch his performance. I needed to know how this character was different and why this story was worth telling. I can say 2 things with absolute confidence: 1.. I didn't stop smiling through the ENTIRE pitch. Ear to ear. 2. Everyone can rest easy. And get very excited."

The 39-year-old hunk went on telling fans, "Trust me when I say that they REALLY know what they're doing over there. This one is gonna special, and it doesn't step on a single thing. I can't even put my excitement into words. I smile every time I think about it. #LIGHTYEAR."

Disney broke the news about "Lightyear" during its Investor Day 2020 on Thursday. The studio announced that the new movie is slated to hit theaters on June 17, 2022. Other details, including who will be directing and is writing the script, are currently not available.

Olivia Cooke, Emma D'Arcy and Matt Smith Join the Cast of HBO's 'House of the Dragon'

These Celebrities Postpone Their Wedding Due to COVID-19