Wolfgang Van Halen remembers his dad, who died of cancer last month, in a heartbreaking Instagram post in which he writes, 'Not a second goes by where you're not on my mind.'

AceShowbiz - Eddie Van Halen's son is having a "really hard" time adjusting to life without the rock legend, one month after his passing.

The guitar great lost his battle with cancer on 6 October, aged 65, and on Friday (November 06), his musician son Wolfgang Van Halen marked the milestone with an emotional post online.

"1 month," the Van Halen bassist captioned a black-and-white photo of the father and son. "Not a second goes by where you're not on my mind."

"I love you so much, Pop. It's really hard being here without you."

Wolfgang, whose mother is actress Valerie Bertinelli, has been regularly posting photo tributes to his dad on Instagram, where he also broke the news of the star's death last month.

He has also been using his social media platforms to attack tabloid reporters for their coverage of the Van Halen tragedy, recently calling out Us Weekly magazine editors for using a picture of his mother alongside the headline, "Love, Loss & Staying Strong" - suggesting the TV star had opened up about the death of her ex in the publication, when she had done nothing of the sort.

Wolfgang continued to warn fans about the fake press on Thursday, highlighting an odd story about Eddie's will containing a wish to have his "favorite" cannabidiol oil handed out to all of his fans.

"This CBD oil thing claiming to be some final gift from my dad is all bulls**t," he vented. "Just another batch of soulless f**kers taking advantage of this horrible situation just to make a quick buck off naive fans. F**king a**holes." 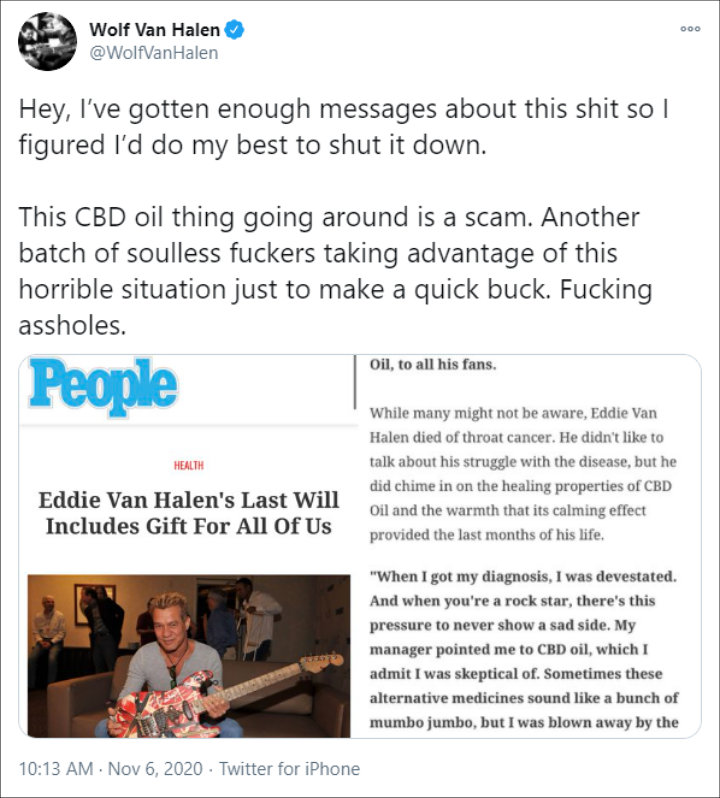 The article was even mocked up to look like it had been published in People magazine, but Wolfgang explained it was all false advertising, seemingly to promote the product. 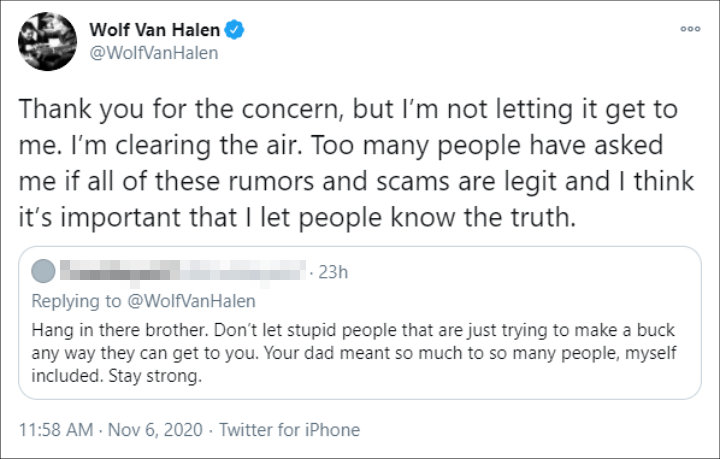 "If you DO happen to know the people behind this, by all means harass the s**t outta them. You have my blessing," he posted, adding on Twitter: "Too many people have asked me if all of these rumors and scams are legit and I think it's important that I let people know the truth."