Despite not getting desired results in the U.S. presidential election, which took place on November 3, the rapper and Yeezy designer has announced his plan to run for president again in 2024.

AceShowbiz - Kanye West didn't get desired results in the U.S. presidential election, which took place on Tuesday, November 3. The rapper and hopeful president was reported to receive nearly 60,000 votes despite his previous confidence, and that prompted Public Enemy's Chuck D to publicly shame him.

"Kanye West managed to receive under 60,000 votes across the 12 states where he appeared on the ballot," Complex wrote on Twitter on Wednesday. Chuck D caught wind of the tweet and he immediately responded with a harsh remark.

Slamming the "Gold Digger" spitter, the "Harder Than You Think" rapper replied, "Absolutely The worst epitome of narcissism." 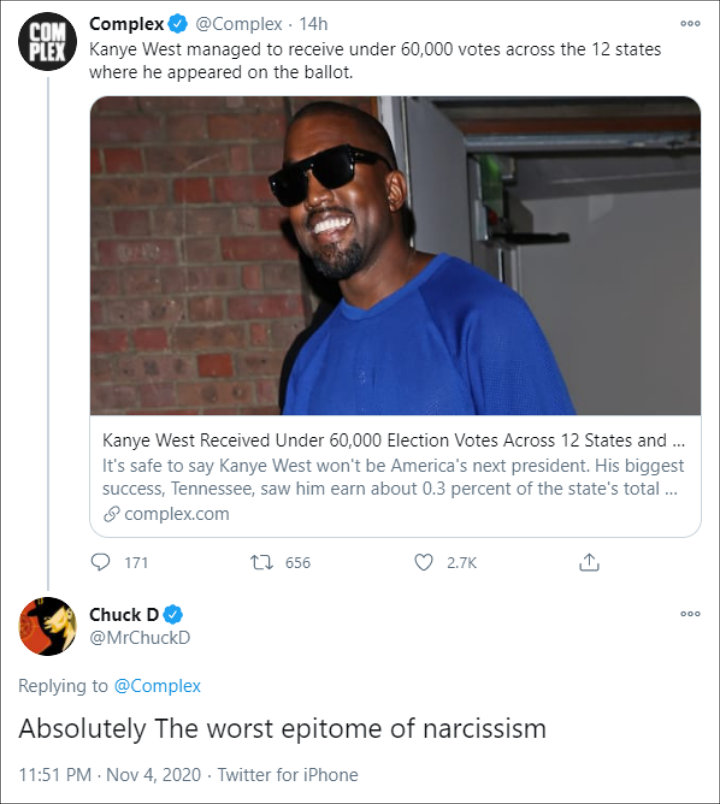 Some fans agreed with his comment as one wrote to him, "I can imagine, in his world its a win. I wonder if video content commemorating Kanyes Run For President is in the pipeline. an election year in which candidates identifying as transgendered, openly homosexual & w diagnosed mental disorders sought office." Another fan added, "I couldn't agree more. Kanye & his buddy Donnie are two attention whores. Silliness! This is kinda ironic, however, bc this is the shirt I wore all day yesterday. Grinning face with smiling eyes."

On late Tuesday, Kanye, whose name appeared on the ballot in 12 states, won 57,000 votes in the November 3 election, according to preliminary tallies by The Associated Press. The 46-year-old musician earned 6,000 votes in Colorado, a state that went to Joe Biden. Meanwhile, he got more than 1,200 votes in another state that went to the Democratic presidential nominee, Vermont.

As that might not be enough to make Kanye the winning candicate, he didn't seem to forgo his goal to get into the White House. In response to the election results, he tweeted on late Tuesday, "WELP KANYE 2024."

Beauty Guru Apologizes for Alluding to Affair With Kanye West

Kanye West 'Is Sad, But Okay' as Kim Kardashian Is Preparing to Divorce Him