In praising the 'Cardigan' singer, the disc jockey slams celebrities who 'won't say who they're voting for because they don't want to piss off their public.'

AceShowbiz - Howard Stern admires Taylor Swift for not being afraid in sharing publicly her political beliefs. When expressing his frustration at celebrities who chose to stay quiet over their choice for the 2020 presidential election, the former "America's Got Talent" judge branded the "Cardigan" singer a good celebrity example.

During the Monday, November 1 episode of his SiriusXM show, the radio personality lashed out, "Celebrities who won't say who they're voting for because they don't want to piss off their public, f*** you too!" He went on to say, "Like Taylor Swift, good for her. She has like 83 million followers and she came out and said who she's voting for and I'm like good, that's standing up for your country."

The 66-year-old, who has been vocal in opposing President Donald Trump, added, "I'm sure her handlers were telling her 'Don't say anything, you'll make people angry. You don't want to be like the Dixie Chicks and be political.' " He then stressed, "F*** that! Be like the Dixie Chicks," as referring to The Chicks who changed their band name in June amid the Black Lives Matter protest.

Sharing a similar aspiration with Howard, Taylor has been known for her support to Democratic presidential nominee Joe Biden. The "Look What You Made Me Do" songstress endorsed the former vice president and his running mate Kamala Harris to her 87 million Twitter followers on October 7.

"I spoke to @vmagazine about why I'll be voting for Joe Biden for president. So apt that it's come out on the night of the VP debate," the 30-year-old superstar tweeted. "Gonna be watching and supporting @KamalaHarris by yelling at the tv a lot. And I also have custom cookies." 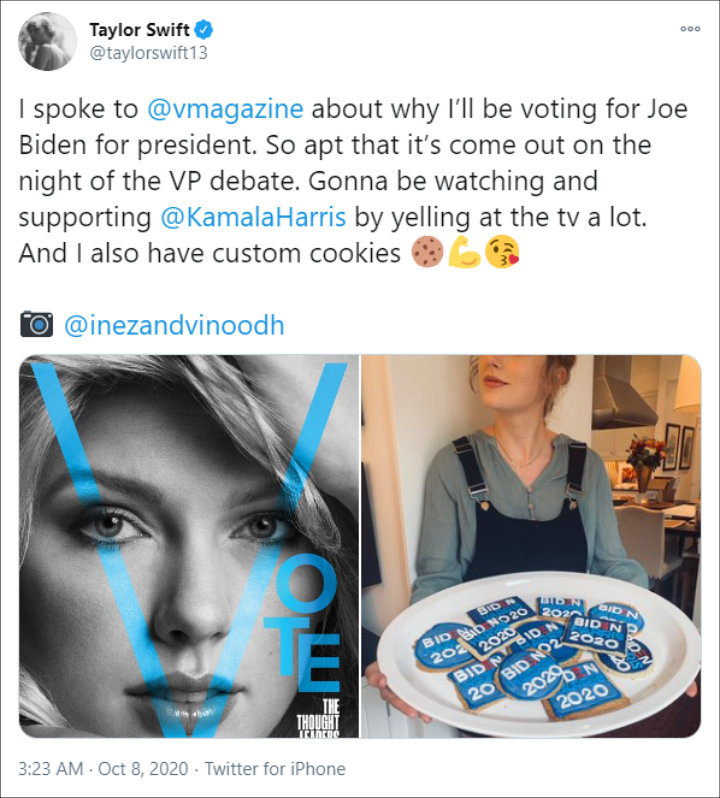 Taylor Swift made public her endorsement for Joe Biden and Kamala Harris.

Aside from Taylor, Howard also made use of his November 1 show to praise Marc Anthony who urged Puerto Rican voters to back Joe. "I thought good for him, he's not a p***y, he's willing to say who he's voting for and he put his country first," the father of three pointed out. "Good for him."

Howard Stern Responds to Backlash Over 1993 Blackface Skit: I Was the Craziest