The 'B.S.' singer appears to get annoyed when a Twitter user asks her if she likes the 'Break Up with Your Girlfriend, I'm Bored' singer's new album 'Positions'.

AceShowbiz - Jhene Aiko is fed up with Ariana Grande question. The singer has made it clear that she refuses to be associated with the "Thank U, Next" songstress by blocking a Twitter user who asked her about the former Nickelodeon star.

The said user, who shared a screenshot of his account being blocked by "The Worst" singer, asked Jhene for her opinion on Ariana's new album "Positions". "do u like positions," he tweeted to Jhene. Instead of getting an answer, he received the harsh response from the R&B singer. "bro what???" the baffled user tweeted after his account was blocked by Jhene. 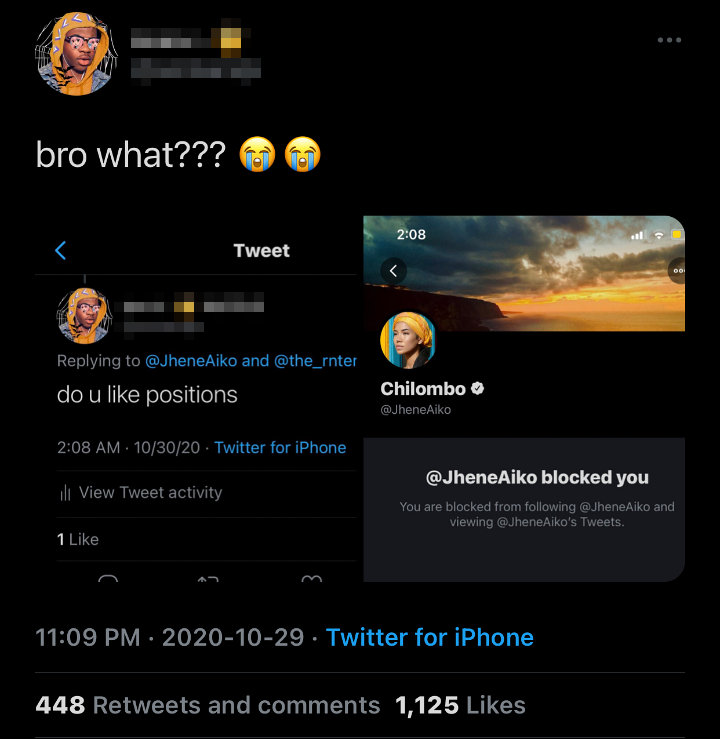 It's unclear what Jhene's issue with Ariana is, but the latter used to date the former's boyfriend Big Sean in the past. Finding the user's question disrespectful, one person reacted, "They just being messy and childish she shld have blocked them. Why are they constantly asking her about her man's ex that is so distasteful and disrespectful????"

Another echoed the sentiment, "i mean, i would imagine it's probably annoying to be constantly asked about your man's ex. it's kinda disrespectful, why would they ask her that? my petty a** would block them too. idk her issue with tinashe tho..."

"Ariana and Tinashe stans always spam her, they don't let her breathe. So dumb," a third commenter weighed in. "She should probably mute them rather than block though, her reacting makes them want to do it more."

Another advised that Jhene should've ignored the said tweet instead, "I don't even like Ariana like that and I can admit the girl is talented. Blocking that fan wasn't called for when she could've acted like she never saw the tweet and kept it moving."

A fifth person was confused by the unaddressed tension between the two female stars, "She was fine with her a couple months ago. Did something go down?"

Someone else, meanwhile, blasted Jhene for overreacting, "Lol I'm convinced she low key crazy and uses that hippy peace love angle to appear to be more down to earth. And all of her music sounds the same."

Jhene has been dating Big Sean on and off since 2016. She sparked breakup rumors in late 2018 after covering up a tattoo of him. Later in 2019, the two sparked reconciliation rumors with their collaboration "None of Your Concern". They have since become inseparable.

As for Ariana, she was in a relationship with the "Bounce Back" rapper in April 2015 after eight months of dating.

Artist of the Week: Jhene Aiko