The 'Love Yourself' hitmaker has taken to his Instagram account to criticize people who are treating his home like a hotel as they wait outside to 'gawk, stare and take pictures' of him.

AceShowbiz - Justin Bieber has had enough with those who disturbed his privacy. On Wednesday, October 14, the "What Do You Mean" hitmaker turned to social media to call out those "inappropriate and disrespectful" people who waited outside his home.

"How do you convince yourself it's not completely inappropriate and disrespectful to wait outside my home to gawk, stare and take pictures as I walk into my apartment," the 26-year-old penned on his Instagram Story feed. "This is not a hotel. It's my home." He, however, did not specify whether the people he mentioned loitering his place were his fans or paparazzi. 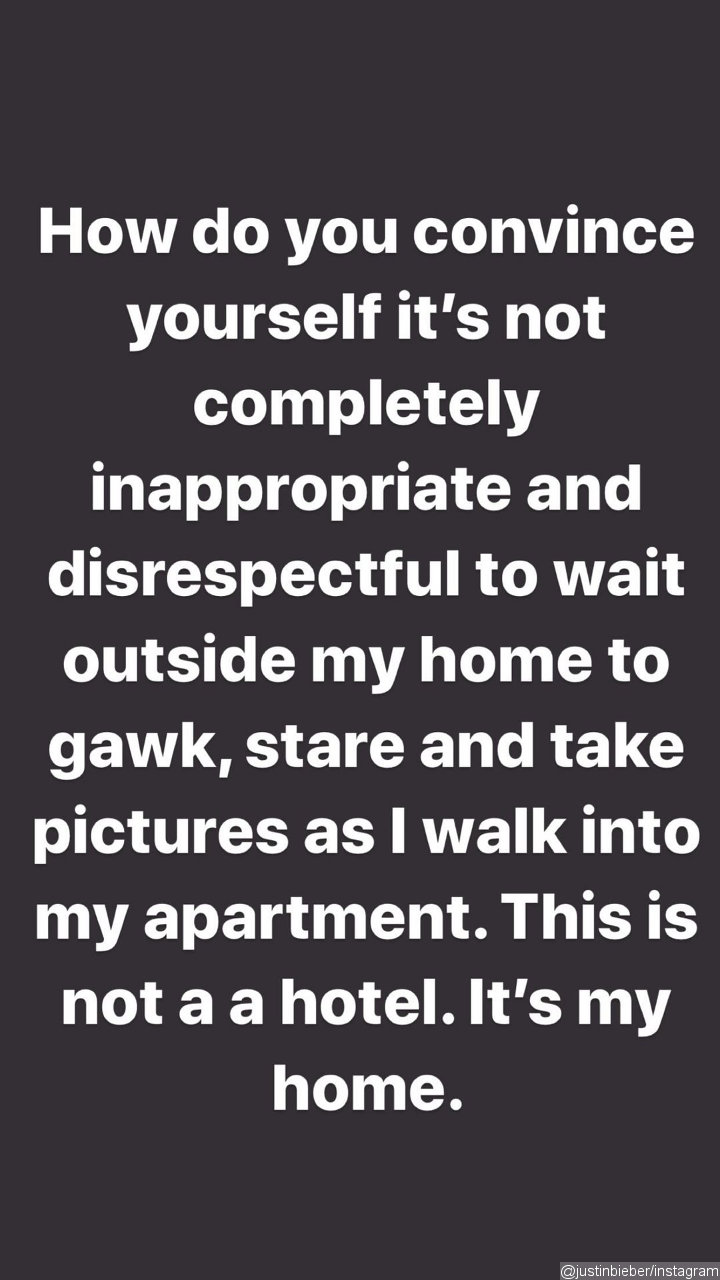 Having been living under the spotlight since he was a teenager has also affected Justin's romantic life. His wife Hailey Baldwin has recently revealed that she used to avoid showing off her affection to the "Love Yourself" crooner in the public because she felt people were always paying attention to them.

"It was difficult for me to understand how to carry on a relationship like this, experienced under the eyes of all," the supermodel told Vogue Italia in early October. "But there comes a time when you have to embrace reality and admit who you are."

The 23-year-old went on to explain, "For a long time I couldn't do it: I didn't kiss him in public, I didn't like the idea of people watching us at certain moments." She then noted, "But I realized that it is a battle that in the long run, instead of protecting you, exhausts you. The fact is, we love each other. And there is really nothing to hide."

While she was hesitant in expressing her love for Justin in public, Hailey was more open of her affection on social media. Back in September, she commemorated the first anniversary of their wedding ceremony by sharing several pictures from their nuptials on Instagram. "1 year ago we had the best wedding. Wish I could live this day over and over," she wrote in the caption.

Justin Bieber and Hailey Baldwin Put Babies on Hold, He Explains Why