BBC have confirmed that a small number of people on the girl group's talent show have tested positive for coronavirus and are self-isolating following the British government guidelines.

AceShowbiz - All four members of Little Mix have tested negative for COVID-19 after production on their British talent show was locked down following a spread of the virus.

Crew members on "The Search" contracted the coronavirus earlier this week (begin October 12), prompting BBC bosses to shut down the set and insist everyone get tested.

But Jade Thirlwall, Leigh-Anne Pinnock, Perrie Edwards and Jesy Nelson have been given the all-clear.

"They've all tested negative and do not need to isolate," a source told The Sun. "They will be regularly tested throughout the run of the series."

In a new statement, TV bosses at the BBC have confirmed filming will be delayed by a week so the affected crew members can self-isolate.

"We can confirm that a small number of people on the Little Mix The Search production have tested positive for coronavirus and they are now self-isolating following the latest government guidelines," the statement reads. "Due to the format of the show we have made the decision to postpone Saturday's programme."

"There are rigorous protocols in place to manage Covid-19 as the safety of all those involved in the production is paramount. We hope to be back on air on Saturday 24 October."

Host Chris Ramsey has taken to Twitter to confirm he has also tested negative for COVID-19, telling fans he was "gutted" the live show had been postponed. 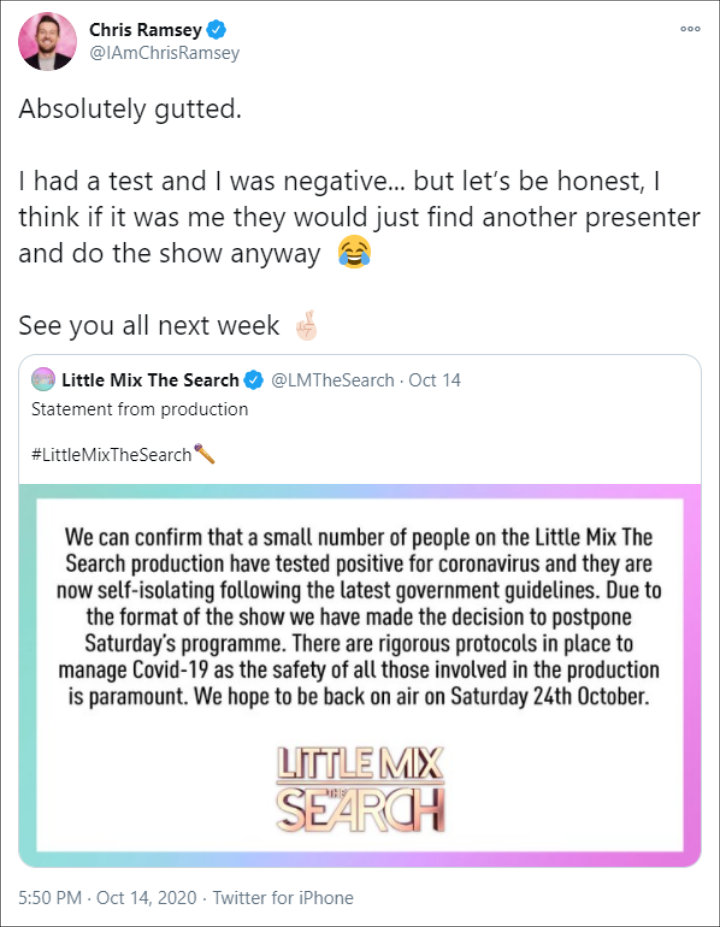 Host Chris Ramsey offered his thought on the delay of 'The Search' filming after COVID-19 scare.

"I had a test and it was negative... but let's be honest, I think if it was me they would just find another presenter and do the show anyway," he joked. "See you all next week."

Laverne Cox Laments Transphobic Attack on Her and Friend: 'It's Not Safe in the World'