The 54-year-old former boxing champion declares he's 'proud' that he will finally vote for the first time this year as he urges Americans to register to vote.

AceShowbiz - Mike Tyson has never voted before, but that's about to change. The 54-year-old former professional boxer has revealed that he will finally vote for the first time this year as he had no idea that he's able to vote before because of his criminal record.

"This election will be my 1st time voting. I never thought I could because of my felony record," he shared on Twitter on Wednesday, September 23. "I'm proud to finally vote." Taking the moment to urge Americans to use their rights at the upcoming election, he added, "Go to https://usa.gov/register-to-vote to register." 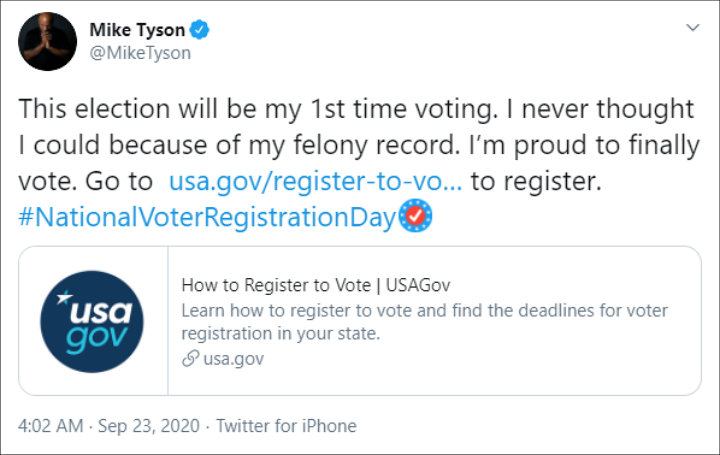 Mike Tyson revealed he would finally vote for the first time.

Mike was arrested in July 1991 for the rape of then-18-year-old Desiree Washington, Miss Black Rhode Island, in an Indianapolis hotel room. Following a trial that took place from January 26 to February 10, 1992, he was convicted on the rape charge and sentenced to six years in prison along with four years of probation.

The former world heavyweight champion was released in 1995 after serving less than three years of the sentence. Due to his conviction, he is required to register as a Tier II sex offender under federal law.

Mike isn't the only celebrity who has urged people to vote. Meghan Markle and Prince Harry called for Americans to vote while making an appearance during a broadcast special unveiling Time's 100 Most Influential People of 2020 on Tuesday, September 22.

"We're just six weeks out from Election Day, and today is National Voter Registration Day," Meghan said in a video message recorded from her home in Santa Barbara. "Every four years, we are told the same thing, that 'This is the most important election of our lifetime.' But this one is. When we vote, our values are put into action and our voices are heard. Your voice is a reminder that you matter. Because you do. And you deserve to be heard."

Her husband, who is not eligible to vote in the U.S., also urged Americans to vote, saying, "When the bad outweighs the good, for many, whether we realize it or not, it erodes our ability to have compassion and our ability to put ourself in someone else's shoes."

"Because when one person buys into negativity online, the effects are felt exponentially. It's time to not only reflect, but act," the Duke of Sussex continued. "As we approach this November, it's vital that we reject hate speech, misinformation, and online negativity."

Mike Tyson Gets Yelled at by Crazy Fan After Drawn Match Against Roy Jones Jr.