The 33-year-old restaurateur allegedly dumped his fiancee via text on the same day photos emerged of him getting cozy with the 'Dawson's Creek' alum in a New York restaurant.

AceShowbiz - Katie Holmes and Emilio Vitolo Jr.'s new romance has been hit with an unpleasant allegation. Words are the "Logan Lucky" star caused the end of her new boyfriend's engagement to designer Rachel Emmons.

According to Daily Mail, the 33-year-old chef ended his relationship with his then-fiancee on the same day photos emerged of him getting cozy with the 41-year-old actress on a date at Mediterranean restaurant Antique Garage in SoHo. He reportedly dumped her by text.

"Up to this press coming out Rachel had no idea what was going on. He is a cheater, and this isn't a 'happy ending' story," says a friend who asks not to be named. Noting that Rachel had "devoted her life" to Emilio, the source reveals that the then-couple had lived together and shared a puppy together since last May.

Rachel reportedly believed she was getting married to Emilio until news emerged of his date with Katie. "They had concrete wedding plans in the works...now she is just left with bad press and forced to move home," the pal dishes on the designer's disappointment.

Confirming Daily Mail's report, OK! shared a similar story about Emilio's past relationship. According to the site, the son of Emilio Vitto ended his romance with his former fiancee on the same day he was first spotted with his new girlfriend, Katie.

"The relationship ended last Tuesday (September 1)," a source close to Vitolo says, offering a different detail of when he called it quits with Rachel. "Same day from the photos." Further suggesting that Emilio was cheating on his then-fiancee, the site notes that he left a flirty comment on Katie's Instagram post on July 31, while he was still engaged to Rachel.

Katie and Emilio confirmed their relationship status with a steamy make-out session during their dinner date at Peasant Restaurant in Manhattan on Sunday night, September 6. The "Dawson's Creek" alum sat on the chef's lap as they were passionately locking lips at their table. 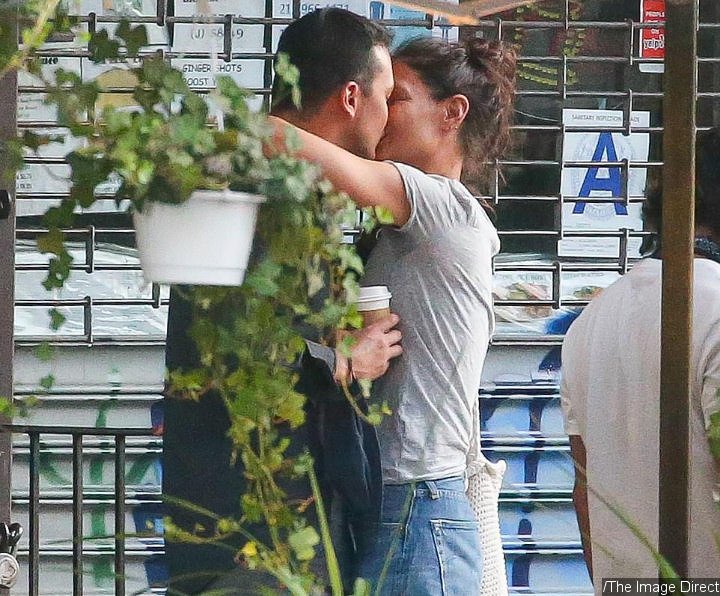 Katie Holmes and Emilio Vitolo Jr. were seen kissing outside his father's restaurant.

The couple continues to put on PDA as they were spotted kissing outside his father's famous Nolita restaurant, Emilio's Ballato in New York City on Tuesday, September 8. In pictures obtained by Daily Mail, the two smiled ear to ear with their masks being pulled down, while his father who sat nearby seemingly tried to look away from the smitten lovers.

Katie Holmes and BF Emilio Vitolo Jr. Agree to Give Each Other 'Space'