The 'Hotline Bling' hitmaker takes to his Instagram account to share a photo of his son getting ready to go to school in a black hoodie and matching pants and sneakers.

AceShowbiz - Proud father Drake could not help but be boasting about his son's educational milestone. On Wednesday, September 9, the "Hotline Bling" hitmaker turned to social media to share his simple fatherly advice as well as a rare new photo in celebration of Adonis Graham's "first day of school."

Making use of Instagram, the 33-year-old shared an image of his nearly-three-year-old boy getting ready to go to school. In the snap, his little man rocked a black hoodie with matching pants and sneakers while standing near a black SUV. Along with it, the rapper noted, "First Day Of School...The World Is Yours kid."

The "God's Plan" rapper's post received positive feedback from his baby mama Sophie Brussaux who gave three colorful heart emojis and a "Mon bebe" note in the comment section. A number of his fellow MCs have also shared their thoughts on the post. 21 Savage jokingly commented, "Already got a chauffeur," while P. Diddy simply stated, "Family first." 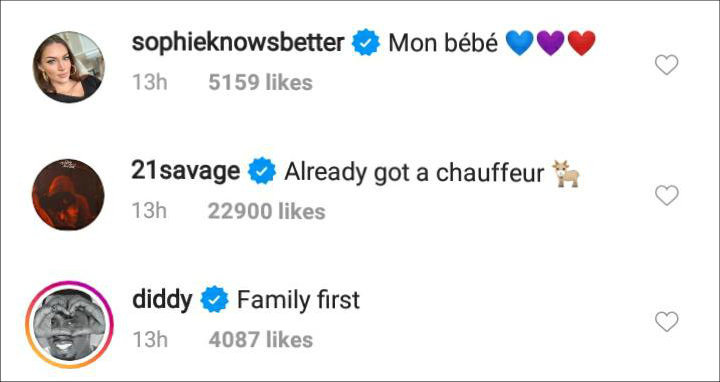 Drake got positive comments from his baby mama and fellow MCs on Adonis' first day of school.

Drake offered fans first look at his young son back in March. Along with a series of pictures featuring him and his toddler, he shared how he felt about self-quarantine amid the coronavirus pandemic. "I love and miss my beautiful family and friends and I can't wait for the joyful day when we are all able to reunite," he noted. "Until then please keep your lights on."

Months later, the Grammy winner celebrated Father's Day with another photo of his boy, who was born in October 2017. "Happy Fathers Day to all the real g'z handling business," he captioned a photograph of his child sitting up in bed wearing stars-filled pajamas.

Drake was first speculated to hide a son in May 2018 after his nemesis Pusha T released a diss track titled "The Story of Adidon". Days later, he confirmed that he secretly fathered a son through his own song "Emotionless" off his "Scorpion" album. More than a year later, he explained that he held back on sharing news about Adonis because he was waiting on DNA test results.