With the 'Independence Day: Resurgence' star playing the piano, the two actors perform a number of classics including 'I Remember You' and 'A Fine Romance'.

AceShowbiz - Sam Neill has treated his fans to a number of fun duet performances with Jeff Goldblum. Enjoying a day off from the filming of "Jurassic World: Dominion", the "Peaky Blinders" star took to social media to share videos of him and his longtime co-star goofing off in front of a piano as they delivered classics medley.

On Monday, September 7, the 72-year-old actor made use of his Twitter account to post a clip of him sitting side-by-side with the "Independence Day: Resurgence" actor as they covered the 1962 hit "I Remember You". Along with the over-one-minute video, he tweeted, "I Remember You #JeffGoldblum." 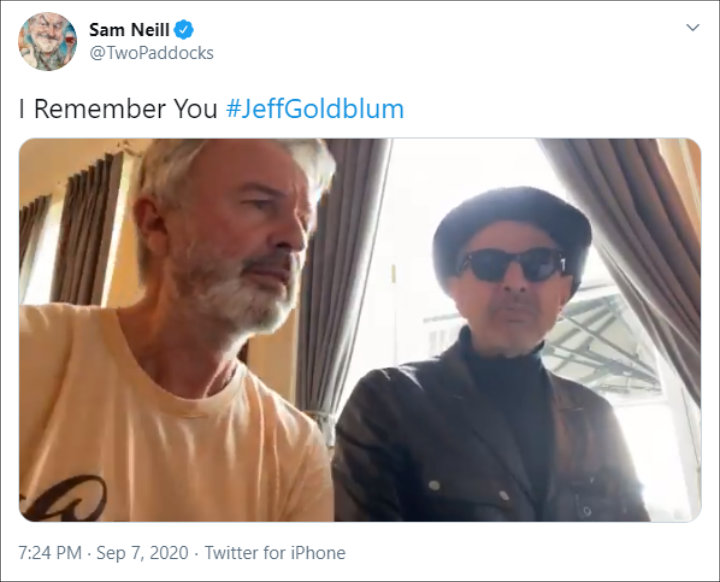 Sam Neill shared a video of him singing 'I Remember You' with Jeff Goldblum.

Sam went on to upload another video in a follow-up tweet. This time, the clip captured him crooning Kurt Weill's "September Song" while his co-star, who is known for his portrayal of Dr. Ian Malcolm, provided back-up vocals. "Another #JamWithJeff," he jokingly noted. "Hers the thing- #JeffGoldblum flatly refuses to rehearse. So every time is the first time." 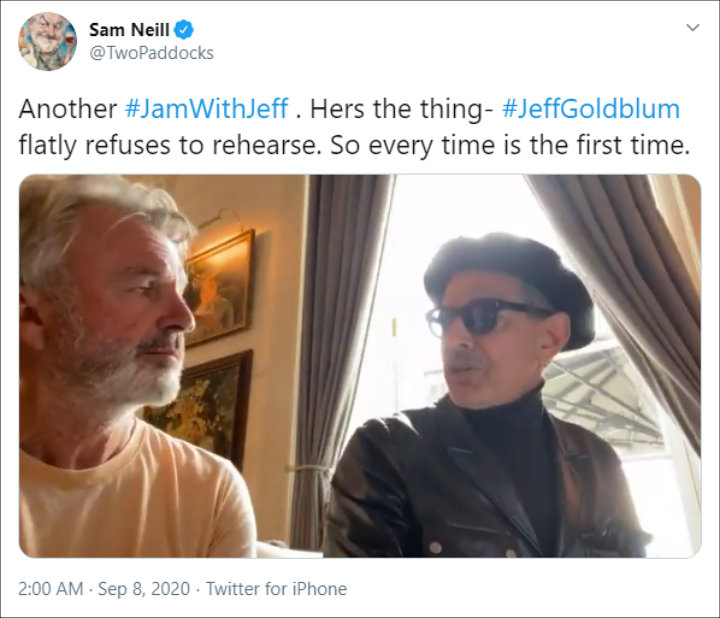 Sam Neill shared a video of him singing 'September Song' with Jeff Goldblum.

In addition to the tweets, the Dr. Alan Grant depicter made use of Instagram to offer more of their collaboration. Covering "Swing Time" musical number's "A Fine Romance" in one post, he teased, "Jammin' with Jeff. It's a day off. So we've been singing a bunch of old songs. Jeff won't practice, so it's first go or nothing. @jeffgoldblum makes me laugh immoderately. He is also a prodigy."

Another Instagram clip saw Sam and Jeff belting out "I've Grown Accustomed to Her Face" from "My Fair Lady". They occasionally cracked jokes in between their singing. "Jeff Jammin' . More from the #LoungeGoldblum on this day off," Sam explained the footage. "Next time I will wear my shades too . I had a cool deficit ... @jeffgoldblum."

The rare duets between Sam and Jeff were met with positive responses. One Instagram user raved, "So great seeing you two legends back together again. Both rather good musicians too. Cheered me up seeing you both having a great time." Another one commented on the last shared video, "Great ending !!! What a bromance . . floatsom and jeffsam !!" A third gushed, "That was the best thing to wake up to ever!" 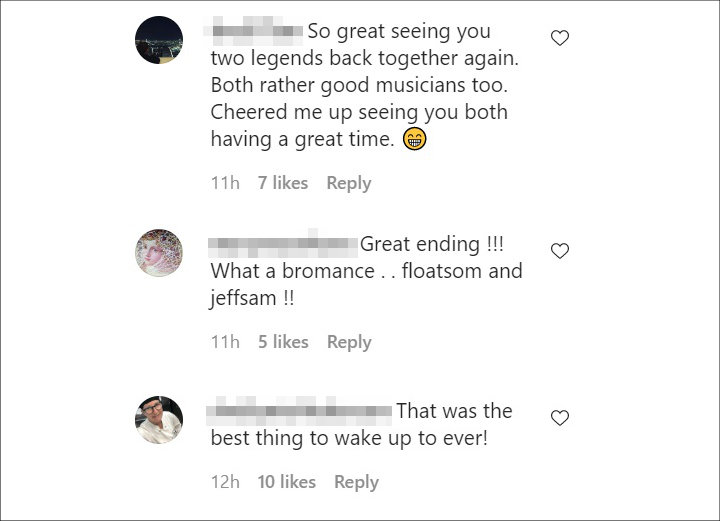 Sam and Jeff are currently in the U.K. to shoot the sixth film in the "Jurassic Park" franchise, which is filmed at Pinewood Studios just outside London. They are joined by fellow original stars, Laura Dern and B.D. Wong, in this upcoming project that brought them together with "Jurassic World" stars Chris Pratt and Bryce Dallas Howard. The film itself is planned for June 11, 2021 release.

David Bowie's Handwritten Lyrics Sold for Over $200K at Auction