AceShowbiz - "Riverdale" fans are threatening to boycott the drama if KJ Apa's character is killed off.

A new promo image featuring the show's Betty Cooper, Veronica Lodge, and Jughead Jones standing over a grave has concerned devotees, who fear it's a sign that Apa's Archie Andrews will die during season five.

But the image ties in with a storyline from the Archie comics, in which the Andrews is presumed dead.

However, fans aren't impressed by the image - the first released since filming resumed in Vancouver, Canada following the COVID-19 shutdown.

One has tweeted: "If Archie's dies I'll stop watching Riverdale." 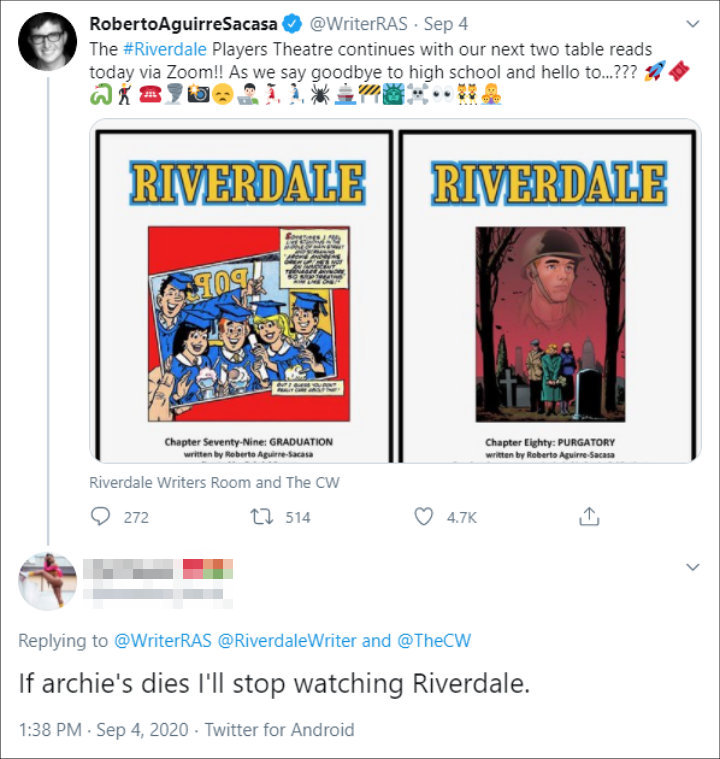 A fan threatened to boycott 'Riverdale'.

And another adds: "Do we have to 'fall' for Archie being dead now after the Jughead story in last season? Exhausting."

A fan questioned over Archie Andrews' fate in season 5 of 'Riverdale'.

Meanwhile, Lili Reinhart recently confirmed that season five would include a seven-year time jump for the characters.

"I'm really psyched about it," she told chat show host Jimmy Fallon on "The Tonight Show Starring Jimmy Fallon". "I think it'll be nice to play an adult...".

Bernadette Beck Calls Out 'Riverdale' for Making Her 'Invisible'