The 'Kissing Booth' actor's sighting with the 19-year-old model comes less than one week after he's pictured kissing and getting cozy with married actor Tommy Dorfman.

AceShowbiz - Jacob Elordi has sparked dating rumors anew following his split from Zendaya Coleman. The actor was caught stepping out for a dinner date with Kaia Gerber at Nobu in Malibu on Tuesday, September 1, prompting speculation that there's something romantic going on between the two.

Both stars opted for casual looks during the outing, with Jacob donning a black T-shirt and jeans. He also wore a fedora hat and white sneakers while keeping his head down. As for the daughter of Cindy Crawford, she sported a matching black top and light blue denim pants with brown boots. She held her dog and carried a black bag. Both of them wore face mask to COVID-19 protocols. 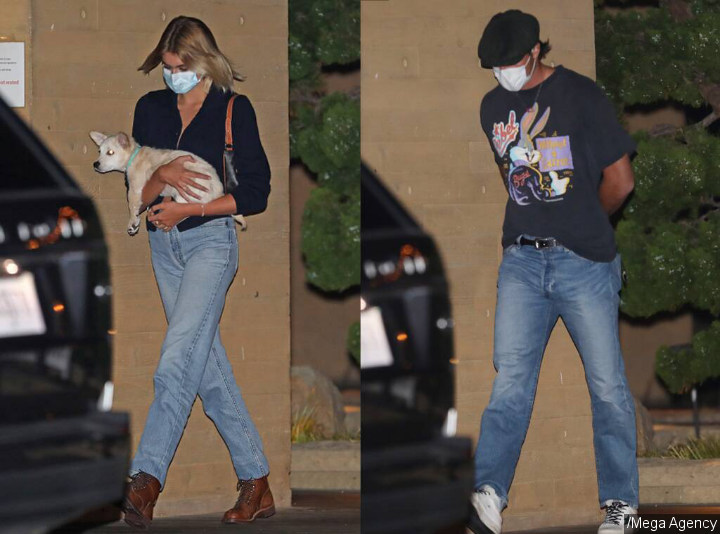 Jacob Elordi and Kaia Gerber were spotted on dinner date in Malibu.

But before the dating rumors run rampant, E! News stresses that the two are nothing more than just friends now. "Jacob definitely has interest in dating Kaia," a source tells site, before adding, "but there is nothing serious going on there."

"They have many mutual friends and have hung out many times in the past. They both have very chill personalities and similar interests. Jacob makes Kaia laugh and her family adores him," the source explains their relationship. "Kaia is keeping things friendly for now but there is flirtation between the two. She has told friends she is single and is only having fun and hanging out with people."

Jacob and Kaia's outing comes less than a week after he's photographed kissing and getting cozy with a married actor, Tommy Dorfman. It's Tommy himself who shared the pictures from their outing on his Instagram page.

However, multiple reports claimed that they're just friends and that Tommy has been married to Peter Zurkuhlen since 2016. "People asking if jacobs gay and they're dating y'all Tommy has a whole husband let bros be bros and friend kiss in peace," one person shut down the dating rumors.

Jacob previously dated his "The Kissing Booth" co-star Joey King, but the pair broke up in 2018. He was then rumored to be in a romantic relationship with his "Euphoria" co-star Zendaya, though neither of them ever confirmed the dating rumors. It's unknown when or whether they have split, but they have reportedly been quarantining on separate continents.

Kaia, meanwhile, was in a relationship with Pete Davidson in late 2019, but they broke up after less than 3 months together.

Erin Andrews Admits to Being Surprised by Her 'DWTS' Firing