The TLC personality is not having it when one follower tells her, 'I hope you never leave that precious little girl again for any man,' referring to her fiance Azan Tefou.

AceShowbiz - Nicole Nafziger is not letting any haters make distorted assumption over her parenting decision. After spending months visiting fiance Azan Tefou in Morocco without her young daughter, the "90 Day Fiance" star was forced to defend herself from critics who accused her for abandoning her little girl for a man.

On Tuesday, September 1, the 26-year-old set aside time to fire back at an Instagram troll. "I never left her," she simply stated along with a heart emoji. It was her reaction to an individual's comment on her post that saw her posing with her daughter by the pool, which read, "I hope you never leave that precious little girl again for any man!!" 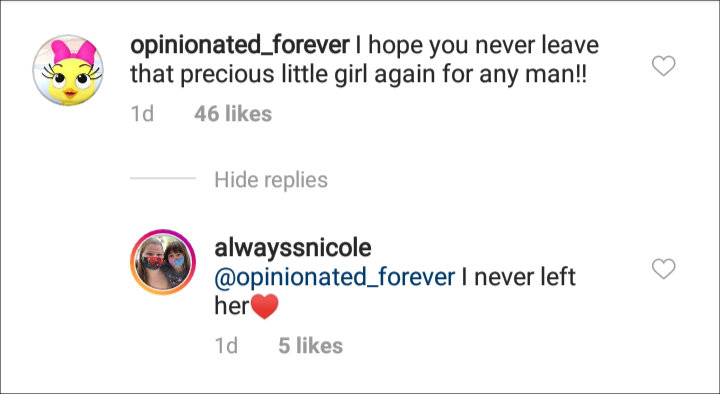 Nicole Nafziger clapped back at haters accusing her of abandoning her daughter.

Nicole's response apparently triggered others to argue that she did leave her 5-year-old, forcing her to further retaliate. "I didn't leave her. She was in the care of my mom," she stressed. "Y'all act like I left her intentionally for that long. If I'd known I got stuck there I would have taken her with me. That would have been the best. I went on a 2 week vacation. That's not called leaving my child. Not like y'all say. So yes, you are being rude."

"I love my daughter. There's no doubt in that," the TV personality emphasized. "But I shouldn't be judged because I want to marry a person and have them as my spouse. He too would become my family. Single parents aren't always single forever. I live for my family. Y'all say this isn't the first time I left her but again, the first time I went, it was vacation."

While acknowledging that her trip went longer than "a usual vacation," Nicole pointed out, "I would have been judged if I took her with me the first time I ever met him." She went on to state, "So say what you want, to some of y'all I'll always be a bad person. But that only shows you don't even know me as a real person. Now that's a fact." 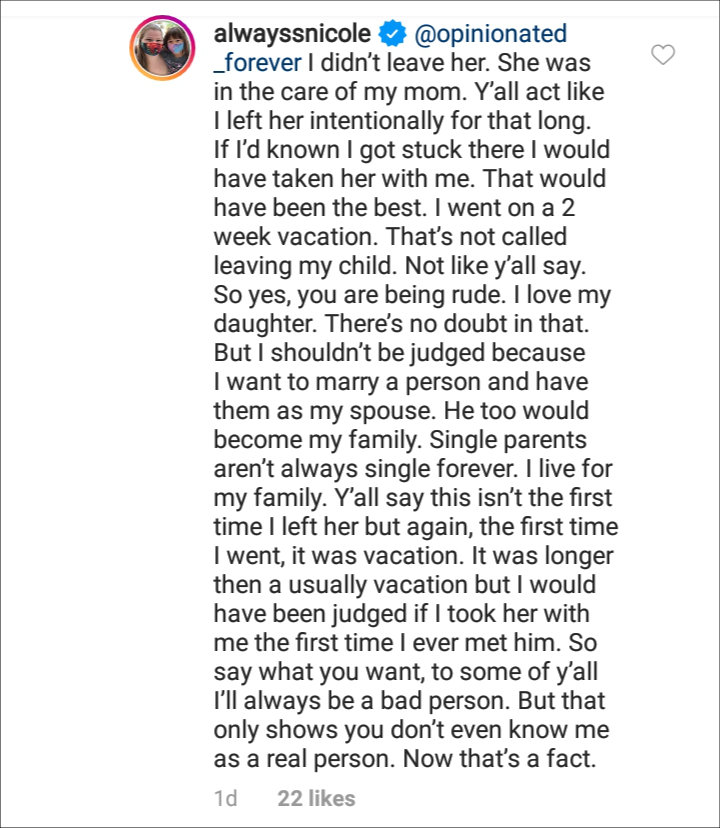 Nicole Nafziger fired back at haters who kept arguing that she did leave her daughter.

Nicole has also blasted another critic who suggested that she should "quit living in a fairy tale that you wish existed but doesn't." In return, she argued, "Just because you don't see every moment we share doesn't mean I'm living in a dream. It's called privacy. And certain cultures care about their privacy. I respect that. I'll take the hate until the day comes where we can share more. I know how I look and I don't care because I live my actual life and I'm happy, all around." 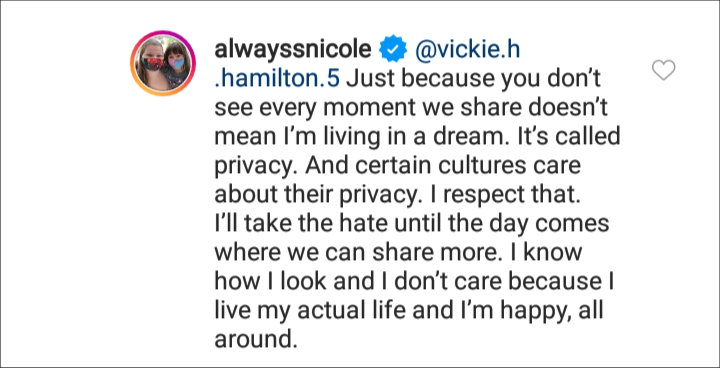 Nicole Nafziger blasted another critic claiming that she abandoned her daughter.

Nicole went to visit Azan in March. Because of the COVID-19 pandemic, it was not until August that she was able to get back to her daughter, May, who stayed in Florida. "Soooo happy to finally be back with my baby girl. I missed her so much and it feels so great to get back to normal with her," she celebrated their reunion with an Instagram post.