Explaining her decision to sit out of the Western and Southern Open semifinals, the tennis champion says, 'Watching the continued genocide of Black people at the hand of the police is honestly making me sick to my stomach.'

AceShowbiz - Naomi Osaka is joining the list of celebrities who have spoken out against police violence. Even more than that, the tennis champion dropped out of her semifinal match on Thursday, August 26 at the Western & Southern Open in New York City as part of a protest following the police shooting of black man Jacob Blake in Kenosha, Wisconsin.

The two-time Grand Slam winner announced the boycott via Twitter on Wednesday. "Before I am an athlete, I am a black woman," she said in a statement. "And as a black woman I feel as though there are much more important matters at hand that need immediate attention, rather than watching me play tennis."

In making the decision, Naomi realized how little the significance she will bring with her move. "I don't expect anything drastic to happen with me not playing," she acknowledged, "but if I can get a conversation started in a majority white sport I consider that a step in the right direction."

As an athlete who represents Japan but has lived and trained in the United States since 3 years old, the 22-year-old shared, "Watching the continued genocide of Black people at the hand of the police is honestly making me sick to my stomach. I'm exhausted of having a new hashtag pop up every few days and I'm extremely tired of having this same conversation over and over again. When will it ever be enough?"

She also added the hashtags of the names of recent victims of police violence, including Jacob Blake, Breonna Taylor, Elijah McClain and George Floyd. 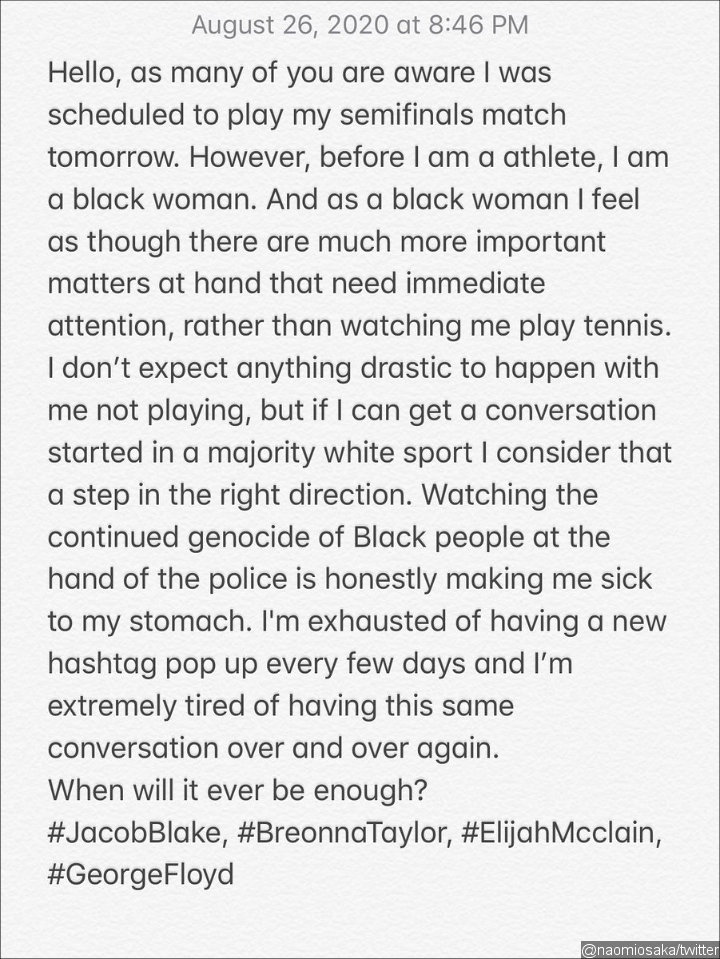 Naomi Osaka dropped out of her semifinal match to protest Jacob Blake shooting.

Naomi, who is born to a Haitian father and a Japanese mother, defeated Anett Kontaveit in three sets in the quarterfinal round on Wednesday. She was scheduled to face Elise Mertens in Thursday's semifinal match.