The former 'Rosie O'Donnell Show' host expresses her concern about the rapper's mental state after his Twitter rant, begging him to take meds for his bipolar disorder.

AceShowbiz - Rosie O'Donnell's message to Kanye West about his mental health issue has backfired. The actress/comedian has expressed her concern about the rapper's mental state following his Twitter rant, but people didn't take it well since she's bringing up his late mother Donda in it.

On Friday, August 21, Ye tweeted out a list of states where his name will appear on the election ballot. "Praise God ... look at all the ballots we're on On," he wrote.

In response to his tweet, Rosie appeared to remind him to take care of his mental health first. "ye - u must take ur meds - save urself - get balanced," so she wrote, "if ur mom was here she would say that to u ..." 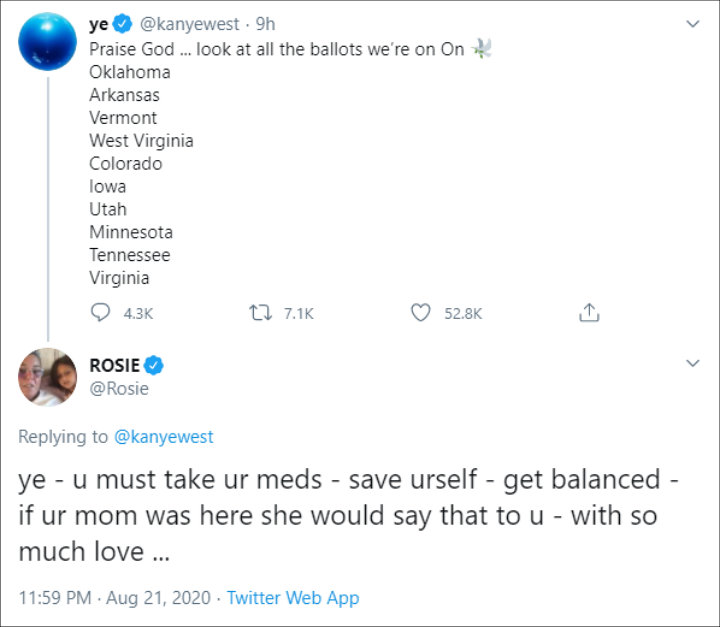 While Rosie sent her message to Kanye "with so much love" and not with the intention to diss him, people have since slammed the former "The View" moderator for mentioning Ye's mom. "Shame on you for bringing up his mom," one person reacted to Rosie's tweet.

"Why would you bring his Mom into this? Do you know his mom? Also, what meds are you referring to? Why assume so much?" another commented, adding, "Even though I disagree with the way Kanye is doing this (he can't win & clearly his team made up names...) Rosie's approach here is disgusting & not helpful."

A third user alleged, "Rosie has the democratic convention banner as her cover and is telling kanye he needs to get on his meds." A fourth one told her to stop playing "psychiatrist," while one other told the 58-year-old, "Don't bring up his mom, I get telling him to take his meds, but leave his mom tf out of this. Empathy mf, do you use it?"

A few others, however, managed to see Rosie's sincerity with her concern, writing, "Rosie, I agree with you! I can tell you're coming from a good place." Another defended her, "She's right. We been giving him a pass for that exact reason for years. His mom passing broke his psyche. That is very clear. Don't be mad that's she really trying to help him instead the dick riding pandering y'all do."

Kanye revealed in 2019 that he has bipolar disorder, but his wife Kim Kardashian once stated that taking meds was not a solution for him. "For him, being on medication is not really an option, because it just changes who he is," she explained. "Traveling a lot does set it off, so he doesn't travel as much as he used to. But honestly, I never want to speak for him, because I am not in his mind."