Taking to her Twitter account, the 'Cardigan' songstress claims that POTUS has 'chosen to blatantly cheat and put millions of Americans' lives at risk in an effort to hold on to power.'

Amid the coronavirus pandemic, many Americans will be relying on voting by mail - but Trump has admitted to intentionally slowing down the service, potentially jeopardising the safe delivery of postal ballots.

"Trump's calculated dismantling of USPS proves one thing clearly: He is WELL AWARE that we do not want him as our president," Taylor wrote on Twitter. "He's chosen to blatantly cheat and put millions of Americans' lives at risk in an effort to hold on to power."

She continued: "Donald Trump's ineffective leadership gravely worsened the crisis that we are in and he is now taking advantage of it to subvert and destroy our right to vote and vote safely. Request a ballot early. Vote early." 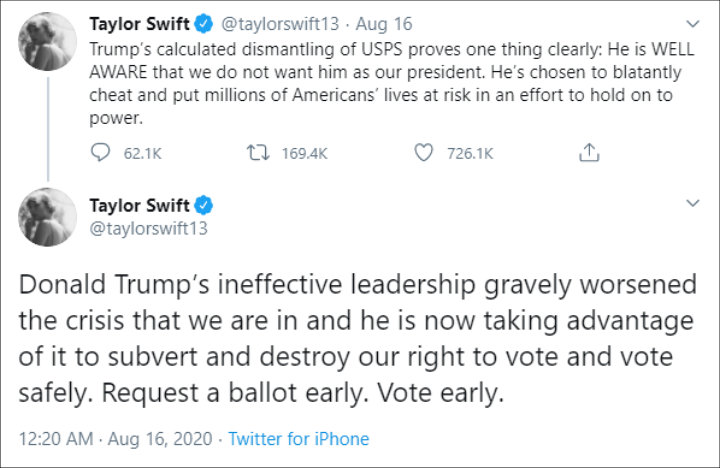 Singer Jason Mraz also called out Trump for cutting funds to the organisation and trying to use the situation to influence the election.

"Tampering with elections is illegal. So is mail fraud... Let's make sure the postmaster general and our President are held accountable for their actions, starting with a personnel change in the People's House," he wrote on Instagram.