Among those picking on the SKIMS founder over her questionable choice of photo for the birthday shout-out to her younger sister is the family's nemesis, Piers Morgan.

AceShowbiz - Kim Kardashian has been mocked for her provocative birthday tribute to mark her sister Kylie Jenner's 23rd birthday on Monday, August 10. The KKW Beauty founder posted both on her Twitter and Instagram page a racy picture of her and her younger sister in the shower, prompting criticism from other social media users.

In what was supposed to be a sweet shout-out to her sister Kylie, the wife of Kanye West shared throwback pictures of her with the birthday girl. The slide began with a photo of little Kylie and they progressed to show them growing up. The last slide featured the provocative shot of the two reality TV stars, who were practically naked with their skimpy white T-shirts becoming transparent while soaked in water.

"My baby @kyliejenner Happy Birthday!!! I can't believe you are 23 years old!!!!" so the mother of four wrote in the caption of the IG post. "The funniest and most loyal person on the planet! Looking for pictures and finding so many funny memories makes me so happy! I love you beyond what you could image!" Meanwhile, the Twitter version of the post had a simpler message which read, "Happy Birthday @KylieJenner."

Kim soon received backlash, particularly from Twitter users, who found her choice of photo for the birthday tribute was inappropriate. Not missing a chance to criticize the Kardashian member, British host Piers Morgan, who has been a vocal critic of the famous family, retweeted Kim's post and commented on it, "so weird." 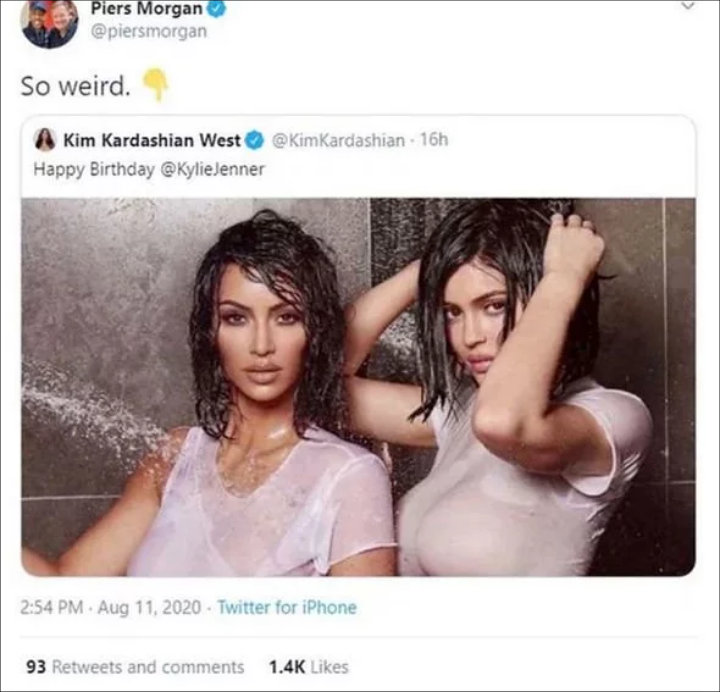