Zion Williamson Responds Maturely to Criticism of Him Being Overweight

Fans are quick to praise the New Orleans Pelicans superstar for his mature answer to the criticism as one gushes over him, 'That's a really mature answer for a 20 year old.'

AceShowbiz - Zion Williamson may be one of the most promising young players in NBA right now, but that doesn't mean he's free from criticism. Among the hate comments he's been receiving, it appears that one of them is about his physical appearance.

People have been debating whether or not he is overweight and Will Guillory of The Athletic has taken to Twitter to share Zion's alleged response to the matter. "Zion when I asked him about people making his size and weight an issue: 'Everybody is entitled to their own opinion. I'm just going to stick to the opinions of the people closest to me and my team, and just go from there,' " Will said of the New Orleans Pelicans superstar on Thursday, August 13. 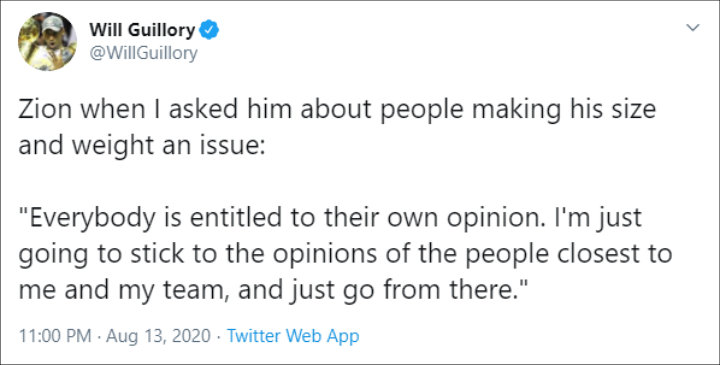 Fans were quick to praise Zion for his mature answer. "That's a really mature answer for a 20 year old," one raved. Someone else responded, "Yes it is, now it's on those people that are closest to him to be mature. If they want his career to be long and sustainable to clamp down on him. Tuff love time."

Further Defending Zion, another fan tweeted, "That's funny because David Griffin said back in October after Zion's injury that Zion's body is specific and unique and people still believe that Z likes to eat unhealthy food...."

Zion was previously injured, forcing him to miss the first 44 games of his rookie campaign. However, he then managed to prove that the hype surrounding him was valid. In his one season at Duke, Zion scored 22.6 points in only 30 minutes per game, an impressive number for the considerably slower college game.

Additionally, Zion had a .702 true shooting percentage, averaging 8.9 rebounds and 2.1 assists per game for good measure. He also recorded a staggering .330 win shares per 40 minutes. Further proving that he's an impressive player, the best LeBron James has ever managed is .328 per 48. Some people believe that if not because of the injury, Zion would be a star NBA scorer.