AceShowbiz - Following the cancellation of her popular talk show "Strahan, Sara & Keke", Keke Palmer seemingly is planning to develop a new project. The "Snack" singer has taken to her Twitter account to tease a millenial take on "The View".

Asking her followers on the blue bird app, Keke wrote on Monday, August 10, "If I were to create a millnnial [sic] 'The View', who would you want to be my co-hosts?" Some fans came up with a few suggestions, including Zendaya Coleman, Willow Smith and Sophie Turner.

Viral social media star Denzel Dion also responded to Keke's tweet, showing interest in becoming the host of the planned project alongside Rickey Thompson. "i mean this sounds perfect for me & @lifeofrickey," Denzel wrote, to which Keke replied with curious eyes emoji. 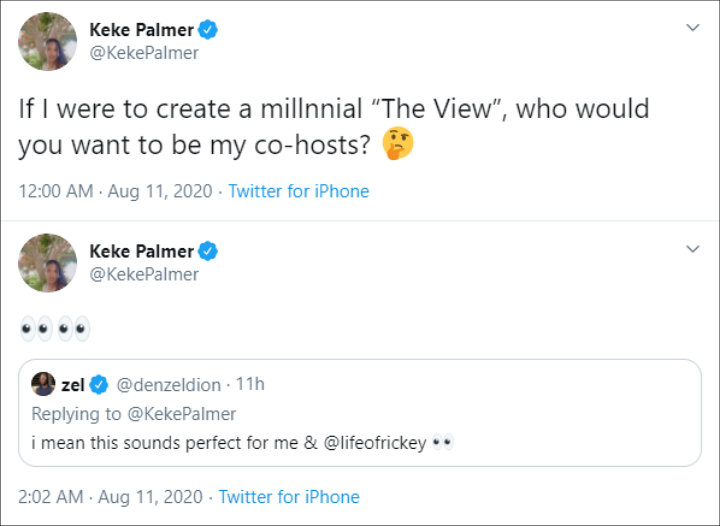 Keke's "Good Morning America" show, which she co-hosted alongside Michael Strahan and Sara Haines, was canceled in July. During her appearance on "Watch What Happens Live with Andy Cohen", Keke shared that the decision was "expected."

"Here's the thing, when the pandemic hit, that's what became all on our mind, was the pandemic - corona, understanding COVID," she told host Andy. "So I kind of knew that, if our show did come back, it would have to be much, much, much later because our show is really about an audience."

She went on saying, "When you think about it, that's what we do. We do a little bit of news, but it's entertainment news. It's really fun conversations and lightheartedness. So it's a different time now, and some of the conversation has changed, and I think it just kinda pushed ('Strahan, Sara and Keke') out."

Last week, the 26-year-old actress was announced to join the cast of Disney Plus' series "The Proud Family: Louder and Prouder". Keke will play the role of 14-year-old Maya Leibowitz-Jenkins, who is a student and activist. Other cast members include Kyla Pratt, Tommy Davidson, Cedric the Entertainer, Jo Marie Payton and more.

Did 6ix9ine Just Respond to The Game Calling Him a 'Rat' Who Outlives Humans?

Keke Palmer on Her Battle With Polycystic Ovary Syndrome: I Do Not Give Up on Myself