Tayshia allegedly is 'game and ready to go,' though it 'remains to be seen is if more men will be brought in' the upcoming season 16 of the hit ABC show.

AceShowbiz - Clare Crawley will no longer front "The Bachelorette" season 16. It is reported that Clare dropped out of the ABC dating show when she was only days into filming as she found love in one of her contestants. Now, Tayshia Adams allegedly steps in to take over her place in the upcoming season.

"The producers have told her that the season will still lead with Clare and her short-lived journey, and will show Clare falling in love with one of her suitors," an insider reveals to E! News. "Clare will then conclude her journey and announce that Tayshia is the lead."

Clare allegedly fell in love with one of the guys while the show's production was delayed due to Coronavirus pandemic. "One of her potential guys found a way to get in touch with her and they began talking," a source explains to PEOPLE.

"By the time filming officially began, they were basically already in love. No one else stood a chance. It just became so obvious from her subsequent few dates that her heart wasn't in it and she just wasn't feeling it. Then she said she wanted out," the source adds.

As for Tayshia, the informant says that she's "game and ready to go." The insider goes on sharing, "What remains to be seen is if more men will be brought in now to give Tayshia a full roster of suitors."

The new season is also promised to be "the most dramatic season ever." The insider teases, "There's more to the story than just [Clare] falling for someone and not wanting to see what else could happen with other men."

In response to the news, former "The Bachelor" star Mykenna Dorn said, "If this is true then this will for sure be the most dramatic season EVER !! Guess we'll all have to tune in to see how this one goes down. I hope both Clare and Tayshia leave happy and in love !!" Evan Bass also chimed in, saying, "The world: The Bachelor franchise is ridiculous you can't find love in a month or 2! Clare: Hold my beer." 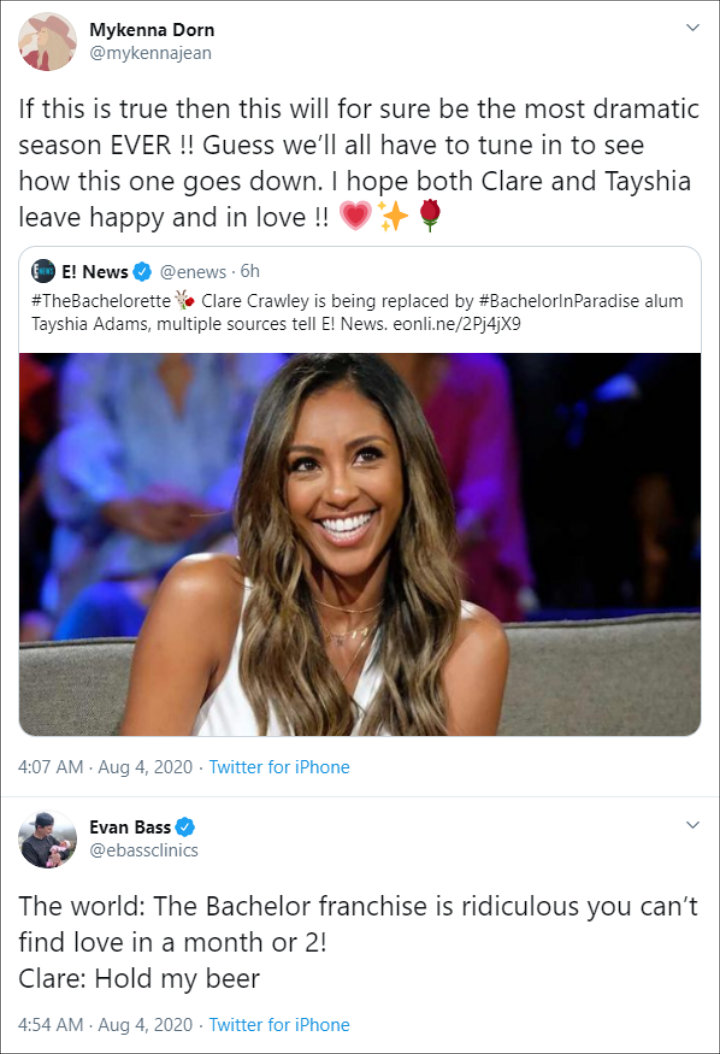 Meanwhile, ABC and Clare have yet to comment on the reports.

'The Bachelorette': Clare Crawley Asks for Respect in New Teaser

Rachel Lindsay Details Her Racist Experience on 'The Bachelorette'

'The Masked Singer' Premiere Recap: The Dragon Is Revealed to Be a Rap Legend