Clapping back at the critics, the Mercedes Jones depicter urges people to focus on the real matter, writing, 'Focus on Naya and her family. Not us. We don't matter right now.'

AceShowbiz - Amid the disappearance of Naya Rivera, some fans noticed that some "Glee" stars have yet to say something about the matter. Among those who got called out on Twitter were Amber Riley and Kevin McHale.

"I haven't seen not one of the GLEE CAST MEMBERS POST ABT NAYA EXCEPT FOR @HeatherMorrisTV AND @dotmariejones y'all a need to do better @LeaMichele @JennaUshkowitz @chriscolfer," one user wrote on the blue bird app, starting the conversation.

Clapping back to the critics, Amber Riley shared, "Show some respect. All our energy is going toward helping find Naya and praying for her safe return and for her family. No one owes anyone online a performance of grief."

She went on urging people to focus on the real matter. "This is very real and devastating. Focus on Naya and her family. Not us. We don't matter right now," the Mercedes Jones of "Glee" added.

Kevin, who played Artie Abrams on the hit TV series, also broke his silence on the criticism. "I cannot begin to understand what Naya's family must be feeling. I know the rest of us are completely shattered, but not without hope. Please respect her family & their privacy in this moment. Please refrain from judging those who don't show their pain on social media." 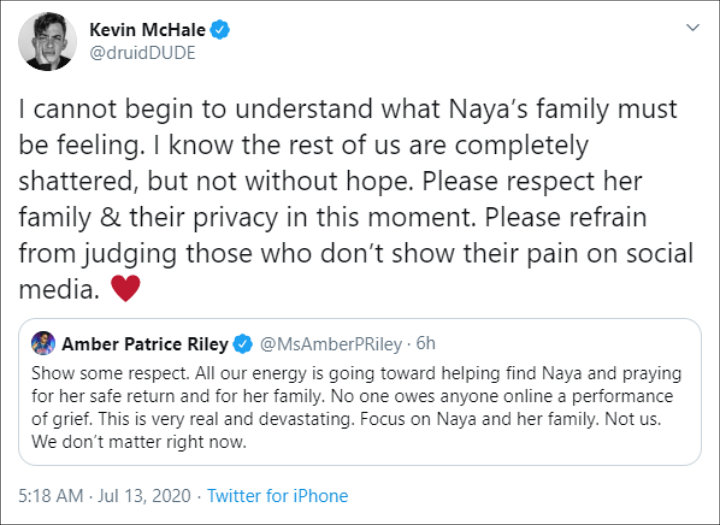 Amber Riley and Kevin McHale clapped back at criticism.

Naya went missing on Wednesday, July 8 after taking a boat ride on the lake with her four-year-old son Josey. While he was found on the boat three hours later alone, Naya never made it back to the vessel. As rumors continued to swirl online that it could be a suicide, Sgt Kevin Donoghue ruled out the possibility. "We interviewed her son and there was nothing that we learned from her son that would have suggested that this was suicide," he said. "Everything that we've learned so far leads to this being some sort of water recreational accident."