The 'Bury a Friend' singer has reportedly posted a solidarity message to abuse victims on her Instagram Story feed before she unfollows everyone, including her brother Finneas O'Connell.

AceShowbiz - Billie Eilish is generating a buzz with a sudden move she recently made on social media. On Wednesday morning, June 24, the multiple Grammy winner removed all of the 600 accounts she previously followed from her Instagram feed, including that of her brother, FINNEAS, without any explanation.

Multiple outlets reported that the 18-year-old pulled the stunt after she posted a supportive message to abuse survivors on Instagram Story. "If I am following your abuser, DM me and I will unfollow them. I will support you," her post read. Less than an hour later, she deleted the post, and her account displayed that she now follows no one. 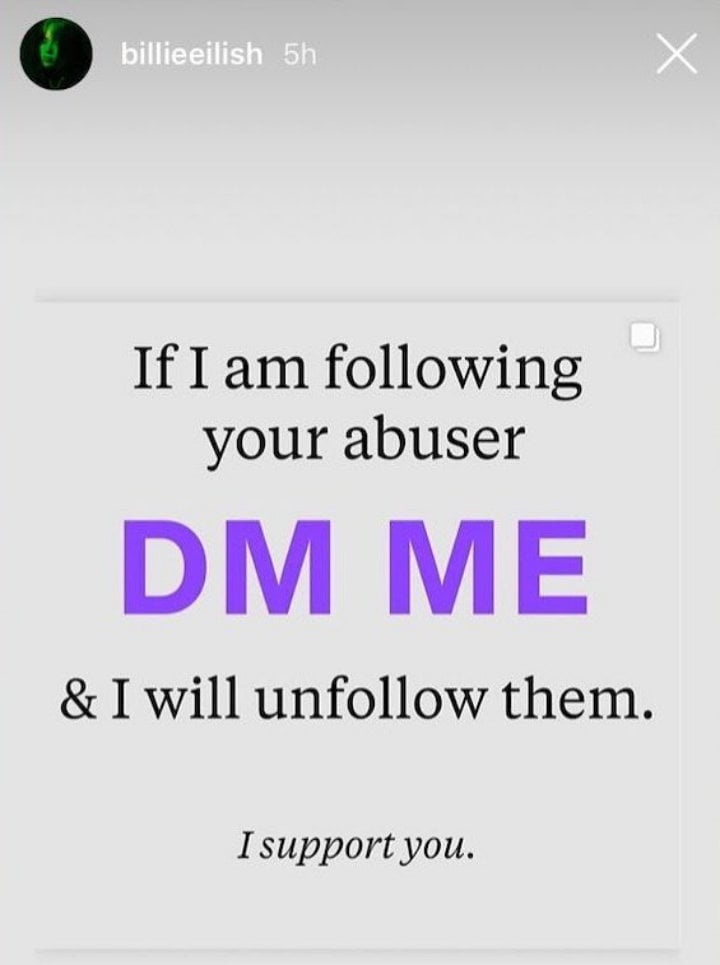 Billie's move prompted many Twitter users to focus on her no longer following Ansel Elgort, Justin Bieber and Chris Brown. A number of others questioned if the "Bad Guy" hitmaker was being hacked. One in particular tweeted, "Its sad how everyone is trying to cancel Billie she's now following no one not even her family idk if she's hacked or she's just tired of all the bulls**t." 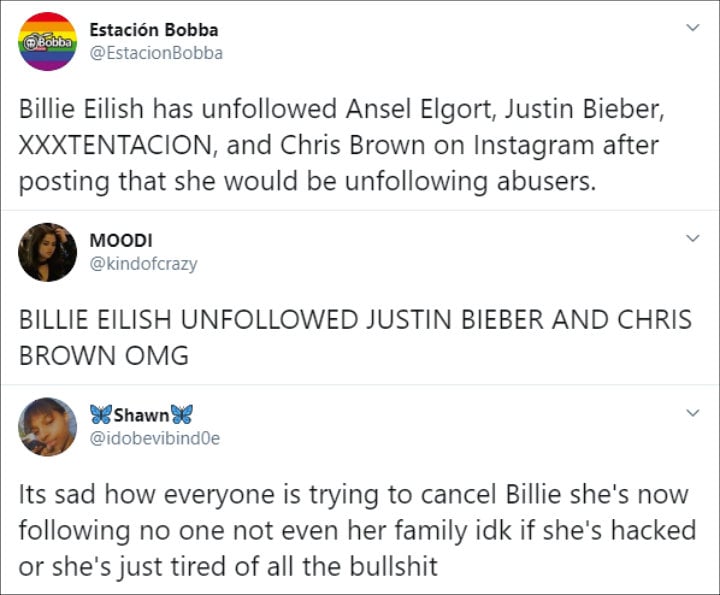 Prior to the buzz, Billie has been using her account to highlight both the Black Lives Matter movement and the novel coronavirus. In early June, she shared a list of organizations she recommended her followers to donate in support of the fight against racial injustice and systemic inequality.

The "No Time to Die" singer has also offered alternatives to those thinking twice in joining the protests due to concerns about keeping their family safe. "If you live with older parents/grandparents/anyone in your family is at higher risk for severe illness and you're worried about their health but you want to protest!: you can always make signs!" she advised. "Put them in your car windows!! stand on the side of busy streets and hold up signs! Chant! Shout! Speak up! & stay safe! Don't just do nothing!"

On Wednesday, Billie was spotted driving her car in Los Angeles. Taped to the front of her Dodge Challenger was a "Black Lives Matter" sign. Another cardboard sign bearing the words "I can't breathe" was taped on one side of her vehicle. She was out wearing a graphic hoodie and a pair of shorts and sneakers. She covered her face with a protective mask.

Steve Bing's Cause of Death Confirmed as Suicide by Coroner