The post in question features the 'Thor: Ragnarok' actor wearing a T-shirt which has a writing that reads, 'Take my art, culture, fashion, life, music, science,' with the word 'life' being crossed out.

AceShowbiz - Idris Elba was among a number of celebrities who celebrated Juneteenth and marked it with a social media post. On Friday, June 19, the Golden Globe-winning actor shared on his Twitter and Instagram page a photo of him wearing a T-shirt with a message that seems to remind people of black people's rights.

The black T-shirt has a writing that reads, "Take my art, culture, fashion, life, music, science," with the word "life" being crossed out. He captioned the snap, "Juneteeth. Never say die," but many think that the message was inappropriate and tone deaf. 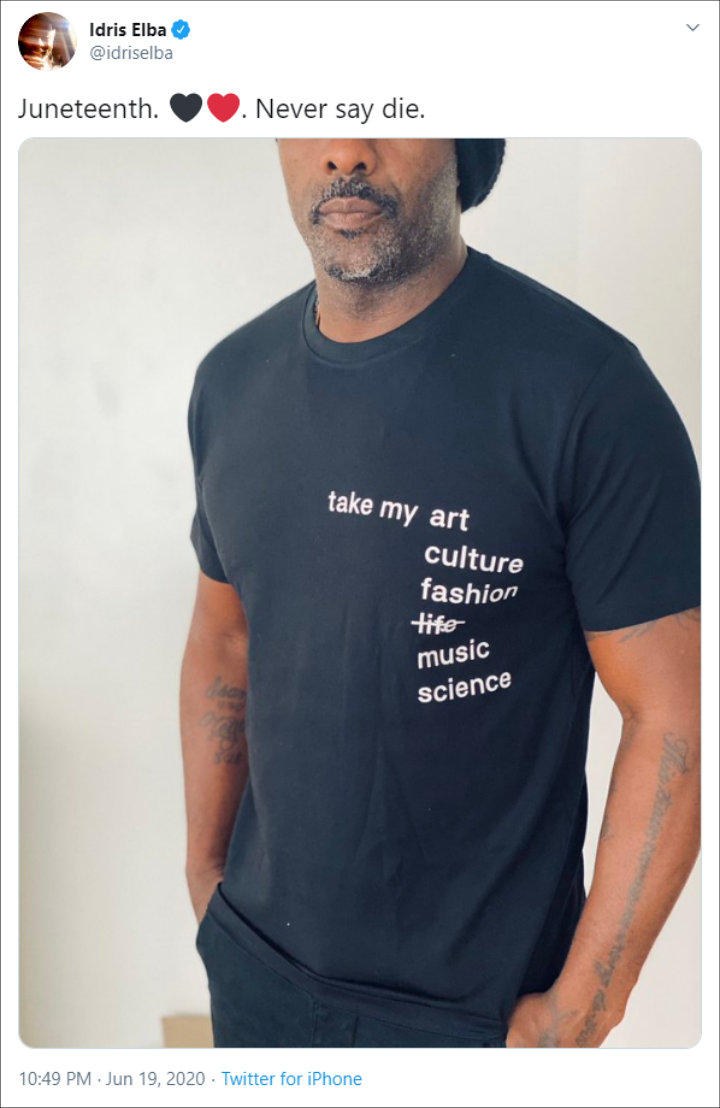 Those critics believe the 47-year-old actor suggested that you can have everything, but don't take my life. Disagreeing with him, one Twitter user wrote below his pic, "How about let us keep our s**t...especially our lives?! Tf."

"our music and art and culture is our way of saying to the world that we exist and they can't take that from us. where they take away our culture, they will eventually take our lives," another argued. A third user snapped, "Oh are we BARGAINING with white supremacy now on this Blackest of holidays? I think not."

Someone suggested that the Heimdall of Marvel Cinematic Universe deletes his problematic post, writing, "Idris, There's time to delete this." One fan remarked, "My man don't know what he doing! Baby...," while another commented, "Uncle done lost his mind."

But there were some others who came up with a different interpretation of the message in the post and tried to explain it. "I'm pretty sure it is calling out just how much wp have appropriated, but our lives are off the table," one claimed. Another defended the "Luther" star, "Y'all misinterpreted what Idris's shirt means. It means everyone has taken every other thing from black people (culture, fashion, music, science) but please don't take our lives too."

Idris has not responded to the backlash and has not explained the real message that he wanted to deliver with the T-shirt.

Bhad Bhabie Goes on First Instagram Live Post-Rehab: 'I'm Back and Better Than Ever'