The Bachelor Nation alums were spotted going a run together in Santa Monica, California just days after the former 'Bachelor' star revealed on his podcast that he is dating someone.

AceShowbiz - Nick Viall has nothing romantic going on with his former flame Andi Dorfman. Having sparked dating speculations after he was spotted going for a run together with "The Bachelorette" alum, the season 21 star of "The Bachelor" was quick to set the record straight on the nature of their relationship.

On Thursday, June 18, the 39-year-old reality star responded to Us Weekly report about his outing with the 33-year-old. "Sorry for the buzz kill.. not dating," he wrote in a comment section of the publication's Instagram post. "Additionally, the only benefits that come from this friendship is conversation and running tips. Enjoy the day." 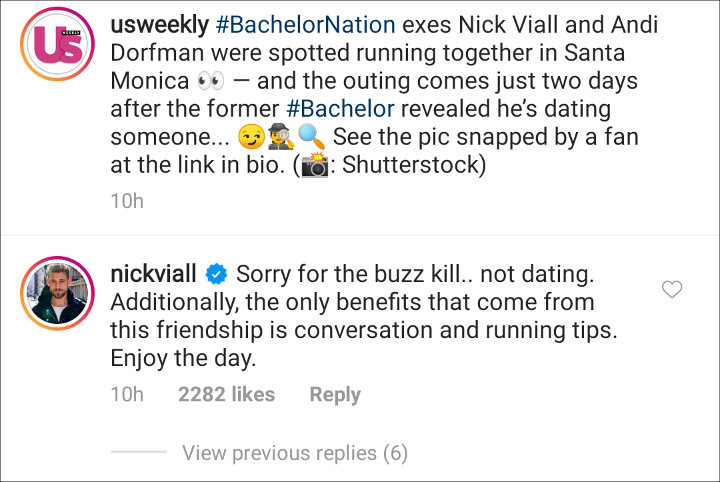 Nick Viall clarified on the nature of his relationship with Andi Dorfman.

Backing Viall's denial was an inside source who insisted that the two are just friends. "[Dorfman] just moved to L.A. so they met up for a run," the insider was quoted by PEOPLE as saying. "There is nothing more to report on here." The source further claimed that Dorfman is "focused on starting a business" instead of dating at this moment.

Viall and Dorfman met each other on season 10 of "The Bachelorette" when he competed to win hear heart. He ended up losing to Josh Murray, but she split from Murray in January 2015. The twosome were caught on camera by a fan as they ran together in Santa Monica, Califonia on on Wednesday, June 17.

The spotting came just two days after Viall admitted to being in a relationship. In the Tuesday, June 16 episode of his "Viall Files" podcast, he spilled, "I recently had a conversation with someone that I'm dating and the question was, 'What if we're not compatible about this thing?' I was like, 'We're not compatible about that thing but I don't know what that means about everything else.' "

As for Dorfman, the Georgia native recently moved to Los Angeles from New York City. On Tuesday, June 16, she commemorated her leaving the Big Apple with an Instagram post. "With a mix of emotions I say, 'Farewell NYC!' The time has come to say goodbye and trust the magic of new beginnings," she began her lengthy message.

"NYC, I love you. I will forever be indebted to you and your magical city. You gave me shelter from my own storm. You breathed life back into me. You were the setting for so many incredible milestones. My rock, my roll, my place of reinvention," she continued. "An incredible chapter of my life. Now, I turn the page and know ... that the rest is still unwritten."