Before the bash, the former couple, who has shared a two-year-old daughter together, has been spending time together in quarantine due to the coronavirus lockdown.

AceShowbiz - Khloe Kardashian and Tristan Thompson keep many speculating about their relationship post-breakup. Having been spending plenty of time together in quarantine due to the novel coronavirus, the "Keeping Up with the Kardashians" star and her ex-boyfriend appeared to be very cozy with each other at a friend's birthday party.

A video posted on Instagram Story by Tristan's former teammate Jordan Clarkson documented a group of people serenading Savas Oguz with a Happy Birthday song. In the beginning of the short clip, Khloe could be seen standing comfortably close to her Cleveland Cavaliers center ex, who seemingly has his arm around her. 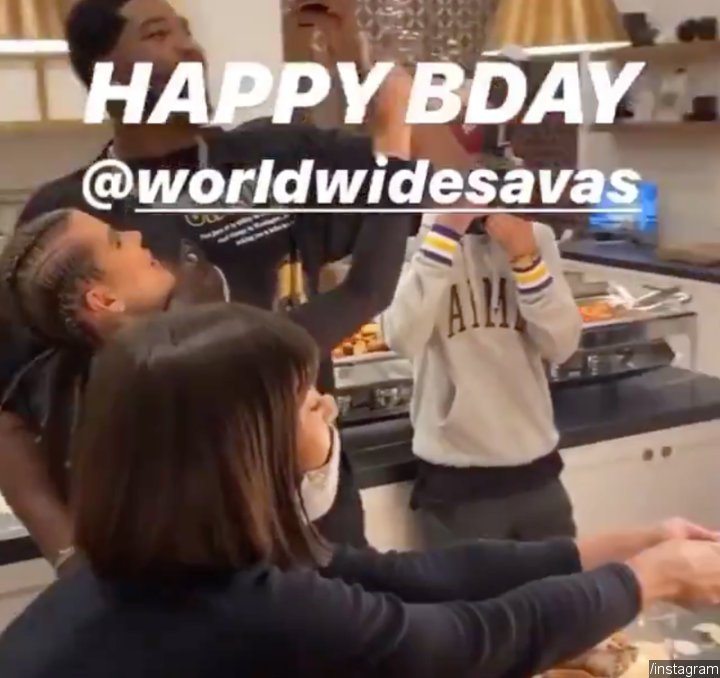 Khloe Kardashian and Tristan Thompson were seen getting cozy at a friend's birthday party.

Per TMZ, the birthday bash itself took place at Tristan's Los Angeles home. While the two appeared cozy, the outlet claimed that there is no change to their current relationship status as co-parents. They were said to have used their time together to work on their friendship instead of getting back together.

Khloe and Tristan began dating in September 2016. The two shared a two-year-old daughter, True, together. They parted ways in February 2019 after the NBA player was accused of cheating on the reality TV star with Kylie Jenner's then-BFF Jordyn Woods. In May 2020, the two were hit with rumors that they were expecting their second child together.

In response to the swirling speculations, Khloe launched a Twitter rant. "I don't go on social platforms much these days AND this is one of the main reasons as to why I stay away," she blasted gossip mongers. "The sick and hurtful things people say. I am disgusted by so many things I am seeing. SMH people swear they know everything about me. Including my uterus. Sick."

Tristan himself has recently been hit with allegations that he fathered a five-year-old son with Kimberly Alexander. He has taken a DNA test to prove otherwise, but Kimberly accused him of fabricating the result, prompting him to send her a cease and desist letter via his attorney Marty Singer.

Instead of complying, Kimberly put out a side-by-side photo of Tristan and her son on Instagram Story in an effort to show their resemblance. Tristan has since filed a libel lawsuit against Kimberly, claiming that she has "maliciously accused" him of being "a deadbeat dad" and that she went public with her allegations because she has had financial problems.

Khloe Kardashian 'Proud' of Herself After Cancer Scare