The 35-year-old 'The View' co-host faced backlash from Twitter users after she tweeted on Tuesday, 'My neighborhood in Manhattan is eviscerated and looks like a war zone.'

AceShowbiz - Meghan McCain responded to the criticism she received over her recent tweet about George Floyd protesters in New York. The 35-year-old "The View" co-host landed in hot water after she claimed that the protesters turned her neighborhood in New York City into a "war zone" amid the protests.

Twitter users, including former "Saturday Night Live" writer Kristen Bartlett, quickly slammed her for the tweet. That apparently prompted Meghan to explain her side in a tweet on Wednesday, January 3.

"1. I am six months pregnant - a gossip organization is about to run a story of where me and my family are currently. I sent a tweet yesterday based on the news I saw happening in midtown we all have been watching all over different media platforms...," so she defended herself.

In a separate post, the daughter of late John McCain, added, "2. I support the peaceful protests, their movement but am absolutely heartbroken about the destruction in the city I have loved since I moved to when I was 18. It is important to have your voice heard and I hope everyone stays safe and healthy." 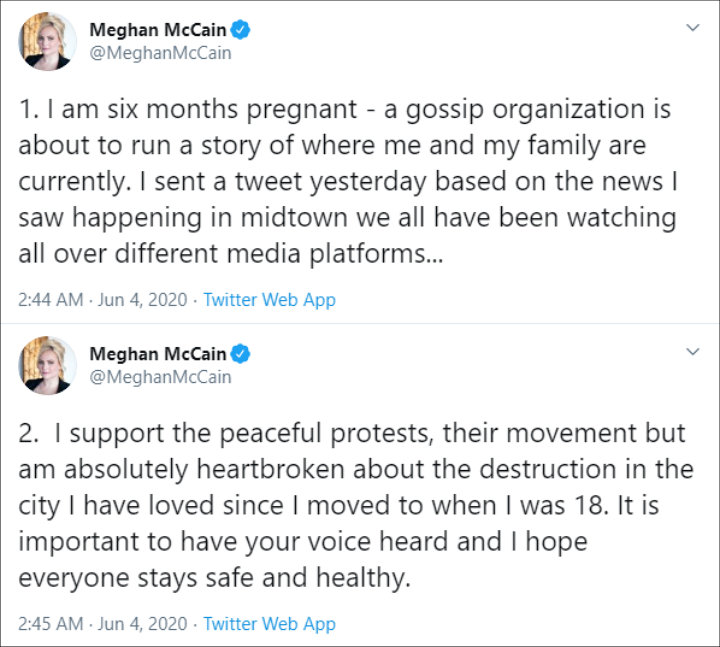 Meghan faced backlash after she tweeted on Tuesday, "My neighborhood in Manhattan is eviscerated and looks like a war zone." Taking jab at New York City Mayor Bill de Blasio and Gov. Andrew Cuomo, she continued, "DeBlasio and Cuomo are an utter disgrace. This is not America. Our leaders have abandoned us and continue to let great American cities burn to the ground and be destroyed. I never could have fathomed this."

It didn't take long before her comments sparked backlash with Kristen being among those who responded to Meghan's claims. "Meghan, we live in the same building, and I just walked outside. It's fine," she said.

Another Twitter user demanded Meghan to give a receipt, writing, "Pictures or it didn't happen." Someone else added, "gotta be honest, I had previously thought most of your opinions were ill-conceived and drenched in privilege and naivete. but then you go ahead and tweet something like this ... and yeah, that's confirmed."