The Louis Vuitton men's artistic director faces backlash after he suggests that he donates $50 'for kids in the streets that need a [sic] bail funds for the George Floyd protests.'

AceShowbiz - Designer Virgil Abloh is apologizing for his previous comments about people looting during protest following backlash. The Louis Vuitton men's artistic director also clarified his $50 donation for bail fund for the protesters.

Over the weekend, Abloh shared a screenshot on Instagram Story which suggested that he donated $50 "for kids in the streets that need a [sic] bail funds for the George Floyd protests." Providing details, he wrote in another post, "more light before a narrative forms around false assumptions ~ around the donation. the #50 donation as was described in a recent screenshot was apart of matching funds moment of friends i saw in my timeline."

"i declared that in the post itself. the concept of 'matching funds' with friend was meant to inspire other to do the same," he added. "i am in support of a group of friends in Miami and that was an act of solidarity to the BLM movement @fempowermia." 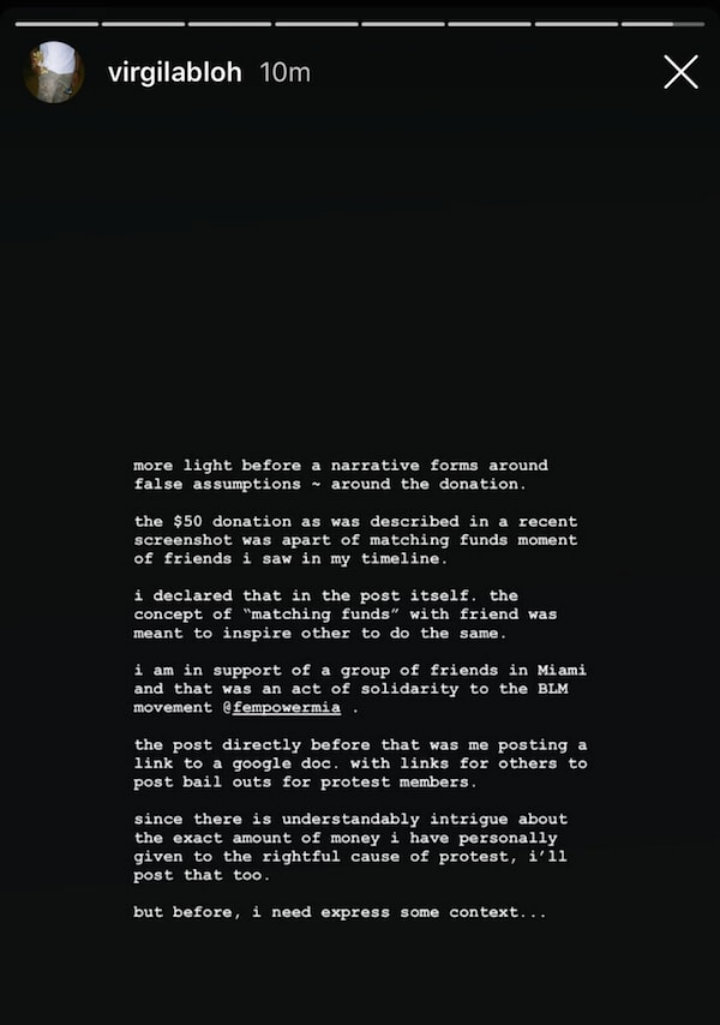 Additionally, he wrote in a now-deleted comment underneath a post about Sean Wotherspoon's Round Two Vintage store being looted. "You see the passion, blood, sweat and tears Sean puts in for our culture. This disgusts me," Abloh wrote.

"To the kids that ransacked his store and RSVP DTLA, and all our stores in our scene just know, that product staring at you in your home/apartment right now is tainted and a reminder of a person I hope you aren't. We're a part of a culture together. Is this what you want?? When you walk past him in the future please have the dignity to not look him in the eye, hang your head in shame...," he continued.

It didn't take long before he was under fire for his comments, prompting him to issue a lengthy apology letter. "I apologize that my comments yesterday appeared as if my main concerns are anything other than full solidarity with the movements against police violence, racism, and inequality," so he wrote in the seven-page statement. "I want to update all systems that don't address our current needs. It has been my personal MO in every realm I touch."

"Yesterday I spoke about how my stores and stores of friends were looted," he continued. "I apologize that it seemed like my concern for those stores outweighed my concern for our right to protest injustice and express our anger and rage in this moment."

In response to the criticism over his donations, the Off-White designer said, "I also joined a social media chain of friends who were matching $50 donations. I apologize that appeared to some as if that was my only donation to these important causes."

He also expressed, "I will continue to donate more and will continue to use my voice to urge peers to do the same," he went on. "I was on the fence about publicizing total dollar amounts because I didn't want to look like I'm glorifying only higher amounts or that I want to be applauded for it. If you know me, you know that's not me."

Through his statement, Abloh shared that he had prepared some upcoming projects including "items releasing shortly where all proceeds support bail funds for protestors [sic]. A platform titled 'Community Service' launched earlier this year that support [sic] emerging black artists and designers with financial support and mentoring." Concluding his letter, Abloh said, "I lead with love and move with respect to everyone I ever meet."