The POTUS sends a warning that his administration will strongly regulate or close down social media platforms after Twitter gave potentially misleading label to two of his tweets.

AceShowbiz - Donald Trump appears to be adamant in following through his threat to close down social media. Hours after accusing the platforms of being bias and demanding them to clean up their act, the 45th president of the United States is reported to have set on signing a social media-focused executive order.

Press secretary Kayleigh McEnany informed reporters traveling on board Air Force One on Wednesday, May 27 about the executive order without getting into further details. White House strategic communications director Alyssa Farah later detailed that the POTUS is expected to sign it on Thursday.

Shortly after news of the executive order broke out, Trump took to Twitter to declare, "Big Tech is doing everything in their very considerable power to CENSOR in advance of the 2020 Election. If that happens, we no longer have our freedom. I will never let it happen!" He added in the same tweet, "They tried hard in 2016, and lost. Now they are going absolutely CRAZY. Stay Tuned!!!"

Hours earlier, Trump made public threat against social media companies. "Republicans feel that Social Media Platforms totally silence conservatives voices. We will strongly regulate, or close them down, before we can ever allow this to happen. We saw what they attempted to do, and failed, in 2016," he launched his Twitter rants.

"We can't let a more sophisticated version of that happen again. Just like we can't let large scale Mail-In Ballots take root in our Country. It would be a free for all on cheating, forgery and the theft of Ballots. Whoever cheated the most would win," the 73-year-old continued. "Likewise, Social Media. Clean up your act, NOW!!!!" 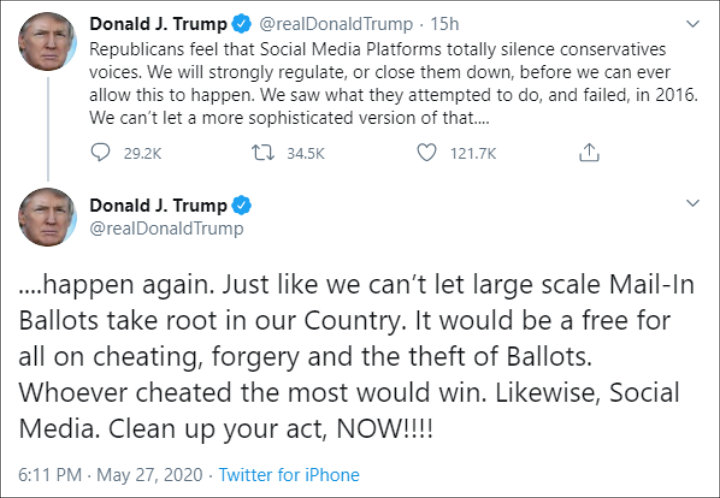 Trump's strong protest came after Twitter slapped a fact-check link to two of his Tuesday, May 26 tweets. In the tweets, the President made unsubstantiated claims about mail-in voting. "There is NO WAY (ZERO!) that Mail-In Ballots will be anything less than substantially fraudulent. Mail boxes will be robbed, ballots will be forged & even illegally printed out & fraudulently signed," he wrote.

"The Governor of California is sending Ballots to millions of people, anyone living in the state, no matter who they are or how they got there, will get one," his tweets further read. "That will be followed up with professionals telling all of these people, many of whom have never even thought of voting before, how, and for whom, to vote. This will be a Rigged Election. No way!" 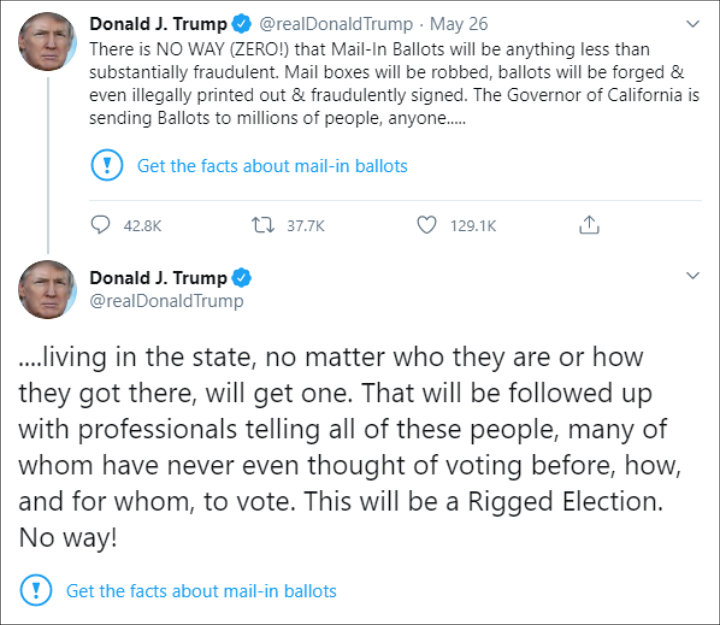 For the first time ever, Twitter added a "Get the facts about mail-in ballots" note and a link under Trump's tweets that leads users to news articles debunking the president's claims.

Trump's Advisors Feared He Would Die When He Had COVID-19