Jimmy Fallon Owns Up to 'Terrible Decision' to Wear Blackface in Old 'SNL' Skit: I Am Very Sorry

The hashtag #jimmyfallonisoverparty is trending on Twitter after a sketch of 'The Tonight Show' host impersonating Chris Rock on 'Saturday Night Live' went viral over the Memorial Day weekend.

AceShowbiz - Jimmy Fallon is apologizing for an old "Saturday Night Live" skit that saw him wearing a blackface. Just hours after the hashtag #jimmyfallonisoverparty got trending on Twitter, the host of "The Tonight Show Starring Jimmy Fallon" addressed the resurfaced sketch by owning up to the terrible decision he made.

"In 2000, while on SNL, I made a terrible decision to do an impersonation of Chris Rock while in blackface. There is no excuse for this," tweeted the 45-year-old comedian on Tuesday, May 27. "I am very sorry for making this unquestionably offensive decision and thank all of you for holding me accountable." 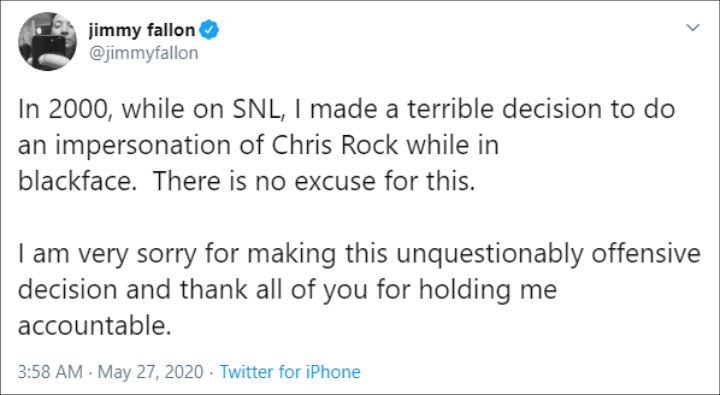 Fallon's apology was met with mixed reactions. Some came to his defense, while others pointed out the need of him expressing remorse. When a fan stated, "Man you don't have to apologize it was 2000. I don't believe anyone is really tripping about that besides the toxicity of cancel culture," another responded, "Don't agree, it's important that he did apologize. Because we should hold people accountable for wrong AND RACIST behavior. I'm glad he apologized." 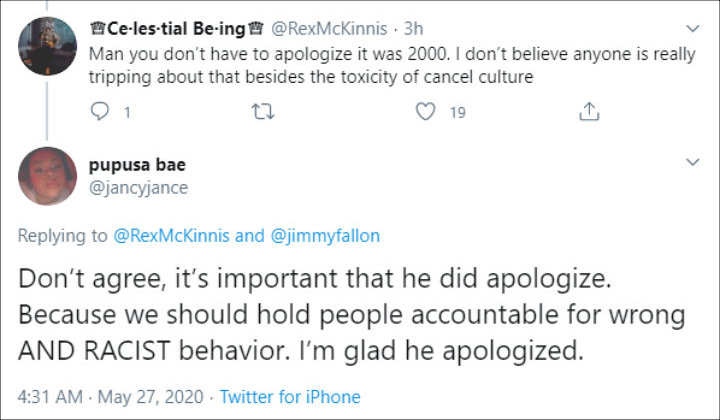 One of the mixed reactions directed at Jimmy Fallon's apology

Another fan showed support by tweeting, "Bro, that wasn't blackface. When you wore that makeup you weren't impersonating the entire black community, just Chris Rock. You shouldn't have to apologize," but was met with a reply from fellow user, "If he painted his face black then it's blackface. It doesn't matter who he was impersonating. Wrong is wrong. Blackface has never been ok and it really doesn't matter if Chris Rock said it was cool or not. It isn't cool." 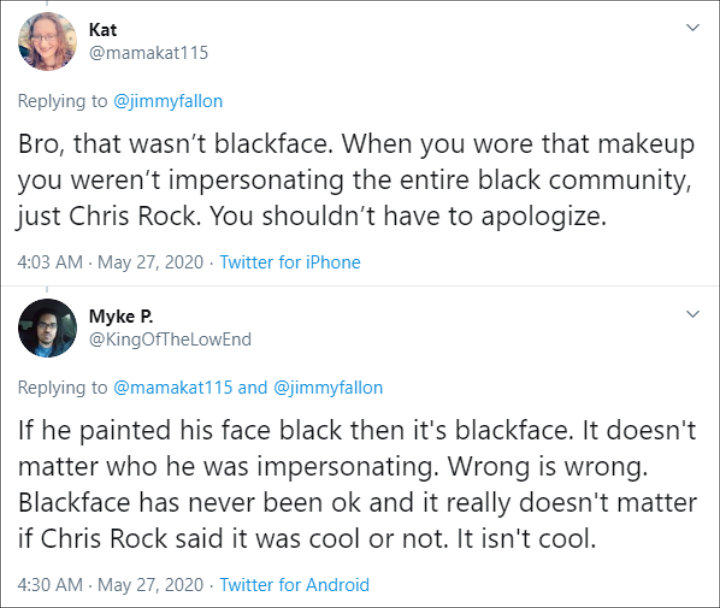 Another sample of Twitter users' banter over Jimmy Fallon's apology

The "Fever Pitch" actor came under fire after a clip featuring his old sketch went viral over the Memorial Day weekend. Appeared to be first shared by the Twitter account @chefboyohdear, the clip made a reference to the 2018 firing of Megyn Kelly by NBC after she appeared to defend white people who do blackface for Halloween during her morning talk show "Megyn Kelly Today".

The clip quickly drew negative reactions from many Twitter users. "he literally did blackface he deserves to be cancelled," one wrote in response. Another noted, "im sorry but this is my first time ever seeing this n this is making my heart hurt i cant rn-." A third demanded Fallon to apologize for what he did. 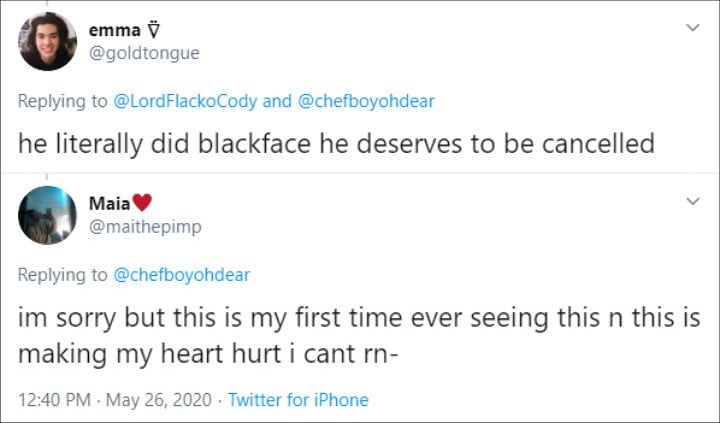 "No one is asking y'all to cancel @jimmyfallon," the tweeter pointed out, "however, what we are asking from Jimmy is an acknowledgment to his use of Blackface, why did he do it and an apology to Black people for donning such a racist, oppressive and downright disgusting overt display of symbolic racism."

A critic demanded Jimmy Fallon to apologize for wearing blackface

Fallon made his debut on "SNL" in 1998, and worked as one of its regular cast member on Saturday Night Live until 2004. In the resurfaced sketch, he appeared opposite Darrell Hammond, who was portraying media personality Regis Philbin.