The season 6 contestant on 'The Voice' apologizes to staff at Kid Rock's Honky Tonk in Nashville for the incident he and his close friends caused, and thanks the local authorities for being professional.

AceShowbiz - Morgan Wallen is apologetic for the disturbance he caused on Saturday night, May 23. Hours after being released on bail following arrest in Nashville for public intoxication and disorderly conduct, the "Whiskey Glasses" singer tried to clear the air by issuing a statement through his social media account.

"Hey y'all just wanted to clear the air. I went out downtown last night with a few old friends," the 27-year-old began in a Twitter post dated Sunday afternoon, May 24. "After a couple bar stops, we were horse-playing with each other. We didn't mean any harm, and we want to say sorry to any bar staff or anyone that was affected."

The season 6 contestant on "The Voice" went on to thank local authorities in a following tweet. "Thank you to the local authorities for being so professional and doing their job with class," he wrote. "Love y'all." 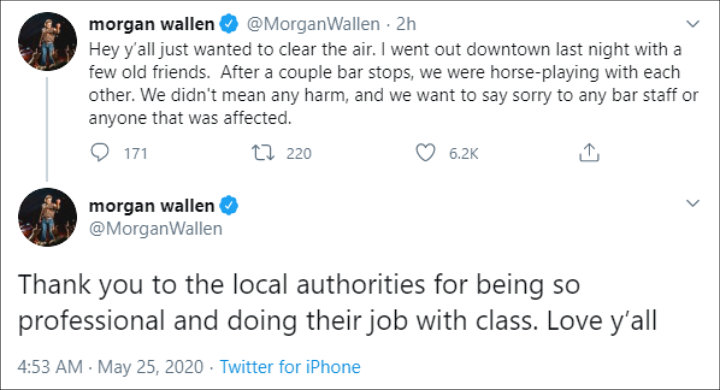 Wallen had a run-in with the law after being kicked out from Kid Rock's Honky Tonk in downtown Nashville. At around 11 P.M. on Saturday night, he was "placed under arrest due to being intoxicated in public, unable to take care of himself, and the reasonable likelihood the offense would continue," WKRN News 2 reported.

It was said that the country crooner got the boot from the bar's security guards after kicking glass items inside. He was given several chances to leave, but refused to do so and got into multiple verbal altercations with passerby. He was considered a danger to himself and to the public since officers noticed a strong odor of alcohol from him.

For the two offenses, Wallen got his bail set at $500. He reportedly made bail at 1:47 A.M. on Sunday morning. He is expected to go to court for the misdemeanor charges in July.

Wallen rose to fame back in 2014 through the singing competition show though he got eliminated during playoffs. Since then, he has released a series of No. 1 country singles, including a Florida Georgia Line collaboration titled "Up Down". Most recently, he came out with a new song called "More Than My Hometown".