Hannah Brown 'Terribly Sorry' for Using the N-Word, Rachel Lindsay Won't Give Her a Pass

While Lindsay takes a jab at Brown's apology by pointing out, 'It's easy to hide behind words,' fellow 'Bachelor' alum Bekah Martinez reminds, 'You can't say the N-word just because black people say it.'

AceShowbiz - Hannah Brown is still held accountable for her racial slur slip despite her attempt to own up to the mistake. After catching backlash for dropping the N-word while singing along to DaBaby's "Rockstar" during an Instagram Live, the season 15 star of "The Bachelorette" offered an apology, but fellow alum Rachel Lindsay won't let her go easy.

On Sunday, May 17, Brown made use of Instagram Story to issue an apologetic statement. "I owe you all a major apology. There is no excuse and I will not justify what I said," she wrote. "I have read your messages and seen the hurt I have caused. I own it all. I am terribly sorry and know that whether in public or private, this language is unacceptable. I promise to do better." 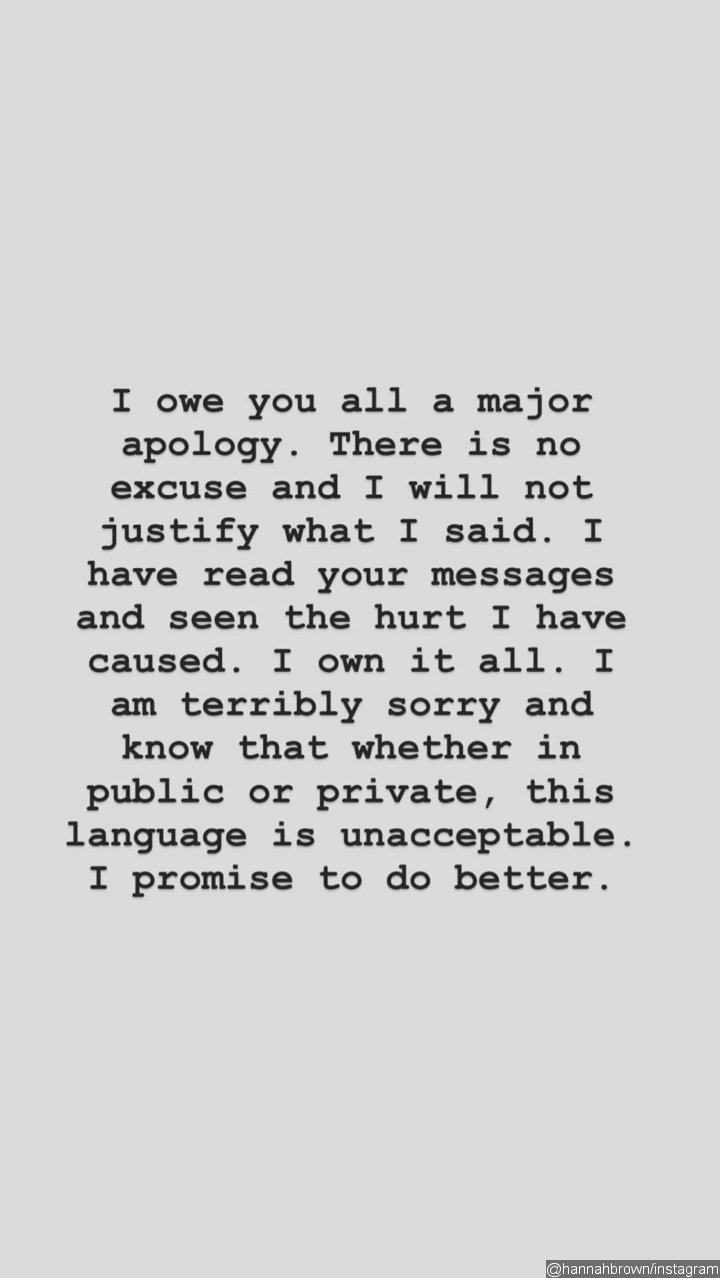 Upon noticing Brown's post, Lindsay expressed her dissatisfaction over the way the former beauty queen expressed her remorse. "It's easy to make a statement. It's easy to hide behind words, but when you're bold enough to say the N-word on camera, on your platform... then you need be bold enough to use your face on camera and apologize in the same way you said the word," she stated.

"I'm not discrediting the apology I'm just saying we can't give people a pass for this. You have to hold people accountable for what they're doing," the 35-year-old attorney continued pointing out. She later claimed, "I'm saddened that I had to do that today. I didn’t want to do it and I want everybody to be better and to do better."

Lindsay further explained, "My reason for doing this is because I want to educate people on the word and encourage you to hold people accountable. If you feel offended or you feel wronged, don't give them a pass, hold them accountable for what they did, and that's what I did today. If you're going to praise someone for being honest and bold and letting it all out, then you have to hold them when they don't do it over a controversial situation, especially one that they've caused."

Sharing similar sentiment with Lindsay was another "The Bachelor" alum Bekah Martinez. Through a series of Instagram Stories, the TV personality wrote, "How are people still gonna defend CELEBS with access to SOOO much privilege, knowledge and education saying the N-word...even if it's 'just the lyrics to a song?' "

"We've GOT to hold people accountable to do better otherwise we're continuing to prioritize the feeling of white people (and some we 'stan') over ending our country's loooong history of casual racism and flippant anti-blackness," the 25-year-old went on voicing her anger. 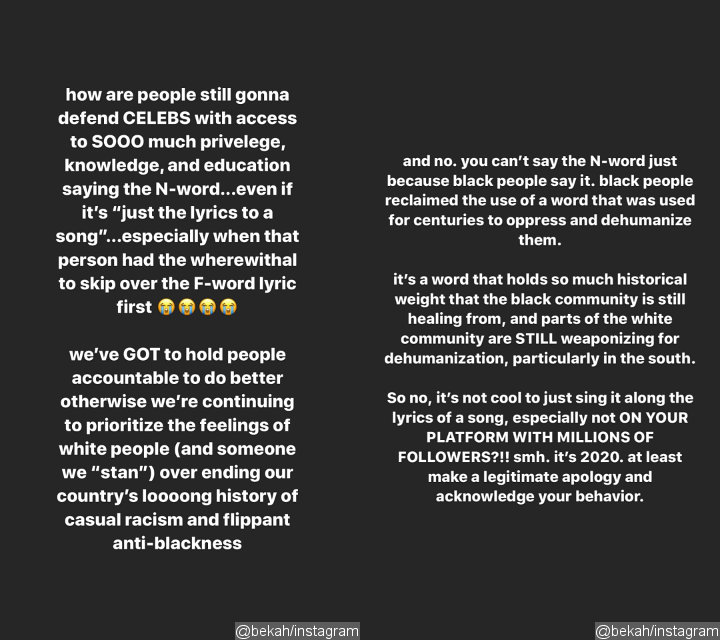 "And no. you can't say the N-word just because black people say it," Martinez continued in a separate post. "Black people reclaimed the use of a word that was used for centuries to oppress and dehumanize them. It's a word that holds so much historical weight that the black community is still healing from, and part of the white community are STILL weaponizing for dehumanization, particularly in the south."