Sam, who was famously known as New Sacred Heart lawyer Ted Buckland on the medical comedy series, died in Los Angeles one year after he was diagnosed with an inoperable brain tumor.

AceShowbiz - Zach Braff has lost one member of his "Scrubs" family. Actor Sam Lloyd, who was known for his portrayal of New Sacred Heart lawyer Ted Buckland on the medical comedy series, passed away at the age of 56 on Thursday night, April 30 in Los Angeles.

After Sam's representative confirmed the sad news, Zach turned to social media to express his condolences. On Friday, April 1, the "Garden State" actor tweeted, "Rest In Peace to one of the funniest actors I've ever had the joy of working with."

"Sam Lloyd made me crack up and break character every single time we did a scene together. He could not have been a kinder man," the 45-year-old star continued on. In the tribute post, he additionally promised that he "will forever cherish the time I had with you, Sammy."

In a separate tweet, Zach shared a video of Sam's a cappella group The Blanks covering "Somewhere Over the Rainbow". The Blanks themselves were also known for their several appearances on the TV series as The Worthless Peons. 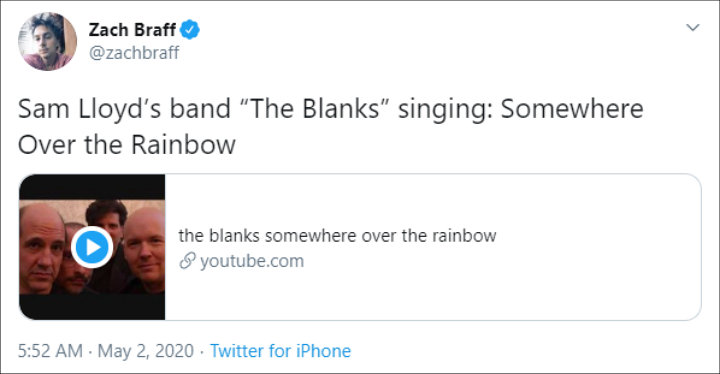 Also mourning the loss was "Scrubs" creator Bill Lawrence. Through a Twitter post, the 51-year-old screenwriter/producer shared his thought, "Thinking a lot about Sam Lloyd today. (Ted). Truly such a kind, sweet guy. He will be missed by so many." 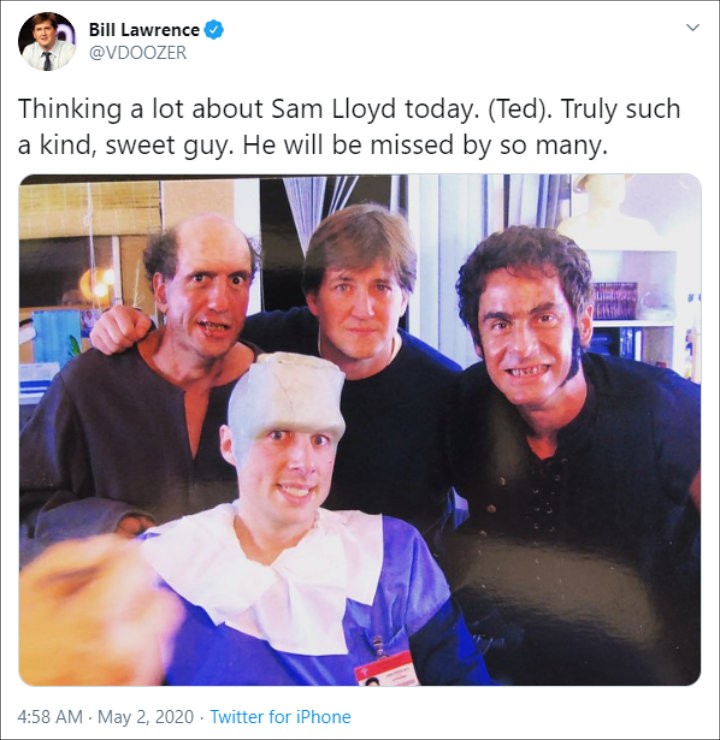 Sam has been battling an inoperable brain tumor and lung cancer since January 2019. A GoFundMe campaign launched by "Scrubs" producer Tim Hobert and his wife, Jill Tracy, detailed that Sam got his diagnosis just weeks after he and his wife, Vanessa, welcomed their first child together, a son named Weston. It was said by that time the cancer has spread his lungs, jaw, liver and spine.

Since his passing, Sam's GoFundMe page has been updated with a statement from Tim. "On April 30th at a respiratory facility in Los Angeles with his beautiful wife, Vanessa, at his side and his sister, Laurel, FaceTiming from New Hampshire, Samuel Lloyd Jr. left this earth and was reunited with his dad (Samuel Lloyd Sr.), his mom (Marianna McGuffin), and his brother (Jackson Lloyd)," the producer shared.