The 'Bodak Yellow' hitmaker has also pledged to donate her share of the profits coming from DJ iMarkkeyz's popular track that blended her memorable way of saying the virus with hip-hop beats.

AceShowbiz - Cardi B wasn't impressed by a fan's tattoo of the moment she went viral with her pronunciation of "coronavirus."

The star took to Instagram last month (March) to express her fears about the growing number of cases of the Covid-19 virus in the U.S., with her followers quickly becoming obsessed with her memorable way of saying coronavirus, and the line "this s**t is real."

And it seems one fan took their obsession to the next level, by having a drawing of Cardi from the viral clip - with her tongue out - etched onto their body.

Sharing a snap of the inking, which appeared to be on the person's arm, Cardi wrote alongside it on Instagram: "Now who the heeiiiiiillllllll tatted my face while I'm saying Karonaaavaaairuusss."

She concluded her post with several sad face emojis, but added a heart emoji at the end.

Following the massive popularity of her rant about the disease, many people blended her words with hip-hop beats to create their own tracks, with one by DJ iMarkkeyz reaching the top ten of the iTunes chart in the U.S.

Cardi and iMarkkeyz then pledged to donate their share of the profits from the track to those suffering financial hardship due to the outbreak, which has resulted in the shutdown of businesses including restaurants, bars, gyms and cinemas. 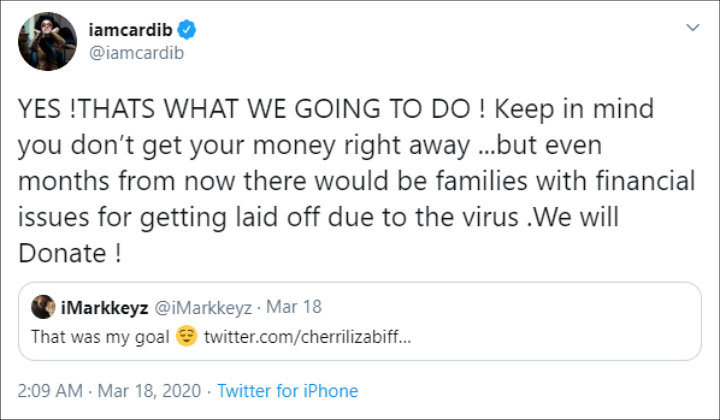 Cardi B and iMarkkeyz then pledged to donate their share of the profits.

"YES !THATS WHAT WE GOING TO DO ! Keep in mind you don't get your money right away...but even months from now there would be families with financial issues for getting laid off due to the virus .We will Donate !" Cardi wrote, quoting iMarkkeyz' tweet promising followers he'd also share the profits.