Some people, in the meantime, are starting to speculate that this is a sign that the Canadian rapper is going to release another collaboration with the songstress.

AceShowbiz - Days after making fans go frenzy with their interaction during an Instagram Live session, Drake has now sparked rumors that he's hoping to get back together with Rihanna. The Canadian star has been caught following his frequent collaborator on Instagram, though the latter doesn't follow him back. 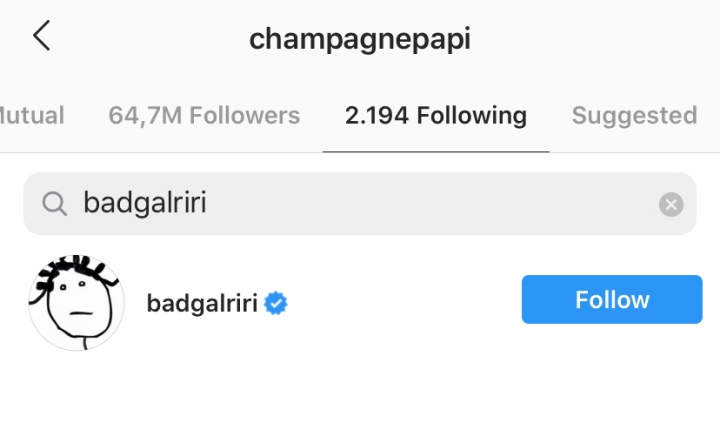 Those who assumed that he's trying to win her heart back were not very impressed by his move, as one of them reacted with a meme of Demi Lovato saying, "GET A JOB. STAY AWAY FROM HER." Another said, "Nooo thank you! We've all seen your reproductive seen," while someone else suspected, "It will be no time before we see them exiting clubs 'separately.' "

Some others, in the meantime, believed that Drake and Rih have a new collaboration upcoming instead, with a few of them suggesting that it'd be included on the "Umbrella" hitmaker's highly-anticipated album. "Does this mean we're getting another Drake and Rihanna record? Because I'm down…," one said, as a convinced individual wrote, "Can't wait for the next smash single."

Rih has been working on her upcoming album for a while now. The "Love the Way You Lie" singer initially confirmed that the record would hit the stores in 2019, but that never happened and made a lot of people upset. In a new interview with British Vogue, Rih revealed that she has been working "aggressively" on her album, but "can't say when I'm going to drop."

"I don't want my albums to feel like themes. There are no rules, there's no format. There's just good music, and if I feel it, I'm putting it out," she said, before clarifying that the album is still going to be a reggae album. She continued, "I feel like I have no boundaries. I've done everything -- I've done all the hits, I've tried every genre -- now I'm just wide open. I can make anything that I want."

Drake Rents Out Dodger Stadium for Romantic Dinner With Model